What do a famous French dentist, Snow White, and a Victorian gentleman with a pesky toothache have in common? They are a few of the harassed, horrified, and often hilarious figures you can find in the exhibit Open Wide: 500 Years of Dentistry in Art.

Join the UCSF Archives and Special Collections for the opening reception and self-guided tours exploring artworks from the collection of Dr. Morton G. Rivo, D.D.S., a former Chief of Periodontics at the UCSF Medical Center at Mount Zion. These selections were first displayed in a 2003 exhibit of the same name at the University of Buffalo. UCSF’s iteration of Open Wide adapts materials from this earlier show and augments the artworks with artifacts, rare books, and UCSF School of Dentistry records from UCSF Archives. Together, they offer a glimpse into how perspectives on dentistry – and dentistry itself – have changed over the years.

Open Wide will be on display on three floors (first, third, and fifth) of the UCSF Library at Parnassus through August 2019.

What do a famous French dentist, Snow White, and a Victorian gentleman with a pesky toothache have in common? They are a few of the harassed, horrified, and often hilarious figures you can find in Open Wide: 500 Years of Dentistry in Art, UCSF Archives & Special Collections’ new exhibit that will open to the public on August 1, 2018.

Developed around selections from the collection of Dr. Morton G. Rivo, D.D.S., former Chief of Periodontics at the UCSF Medical Center at Mount Zion, Open Wide offers a glimpse into how perspectives on dentistry – and dentistry itself – have changed over the centuries. The artworks, supplemented by artifacts, rare books, and other materials from the UCSF Archives, will be on display on three floors of the UCSF Library.

You can find the artworks featuring the French dentist in the main lobby, Snow White on the first floor, and the Victorian gentleman on the fifth. Each speaks to a theme in Open Wide: developments in dental practices; symbolism and beliefs that have grown around the teeth; and, perhaps not the least, that all-too-familiar feeling of not wanting to go to the dentist. 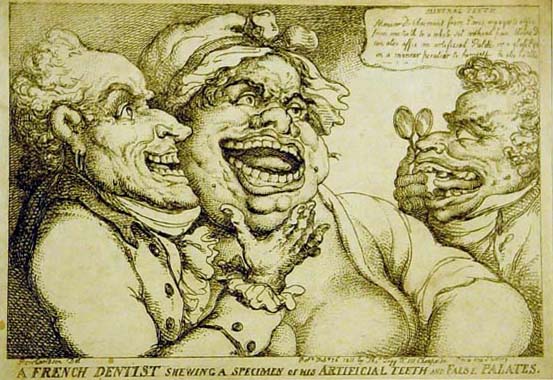 The French Dentist Shewing a Specimen of His Artificial Teeth and False Palates (1811) by Thomas Rowlandson.

If you’ve explored the UCSF Library or its social media recently, you might have already spotted the French dentist and his grinning patient in the exhibition poster, which is based on an 1811 etching, The French Dentist Shewing a Specimen of His Artificial Teeth and False Palates. The dentist of the title is Nicholas Dubois de Chémant, who was credited with the patents for the first porcelain teeth in Paris and London. The print pokes fun at a moment in history when these were all the rage among the upper classes, having been considered better than earlier ones of ivory and bone.

The French Dentist and his patient may seem very pleased with themselves, but the technology behind dentures still had to be perfected in the decades to come. You’ll find other samples of false teeth, developed through the first half of the 20th century, exhibited alongside this print. 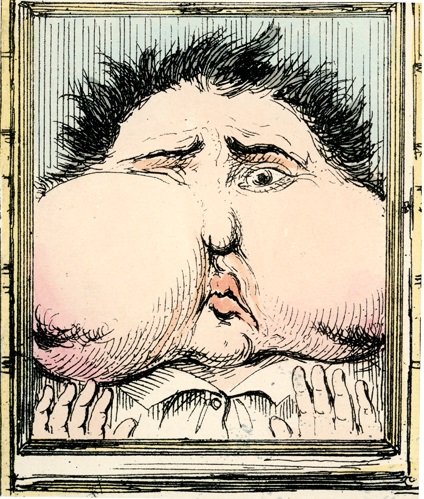 An illustration from The Toothache (c. 1849) written by Horace Mayhew and illustrated by George Cruikshank.

Who would do anything not to go to the dentist? One Victorian gentleman, the protagonist of a comic strip published around 1849, certainly does. He even attempts to cauterize his own tooth with a red-hot poker and tries “240 infallible cures”– which include filling his mouth with cold water and sitting on the fireplace hob to let it boil – just to avoid a visit.

Discover whether his attempts at self-treatment amount to anything through panels that have been reproduced from the original illustrations. This Victorian gentleman’s adventures are complemented by similarly humorous cartoons from UCSF School of Dentistry yearbooks published in the 1900s.

Out Hunting for Teeth 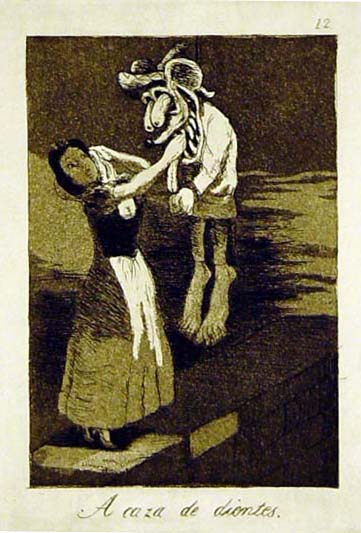 A caza de dientes (Out Hunting for Teeth) from the series Return to Goya’s Caprichos (1999) by Enrique Chagoya.

Amidst all the amusing images in Open Wide, several prints strike a graver tone. These include three etchings depicting an 18th-century practice: pulling a hanged man’s teeth to use them for love potions. The earliest etching, by the Spanish master Francisco Goya, critiques this superstition; the second, by Salvador Dalí, mimics Goya’s and echoes some of Dalí’s sexual beliefs about teeth.

Snow White appears in the latest iteration of the scene, a commentary on Eurocentrism in art made by the Mexican-born American artist Enrique Chagoya. Here the Disney princess has replaced the young girl taking the corpse’s teeth in the original print, while another cartoon character, Rat Fink, has replaced the dead man. Superstitions about the teeth may no longer be the focal point of the piece, but it still has bite.

Goya and Dalí are not the only international luminaries represented in the show; Open Wide also features pieces by Marc Chagall, Utagawa Kuniyoshi, and Joan Miró. Aside from Chagoya, the exhibit also showcases other artists with connections to the San Francisco Bay Area, like Matt Phillips, Jeff Leedy, Art Hazelwood, and Dorothy Winslade.

Today’s post is an introduction from Marissa Nadeau, our newest intern here in the Archives. She will be working on the upcoming exhibit, Open Wide: 500 Years of Dentistry in Art. 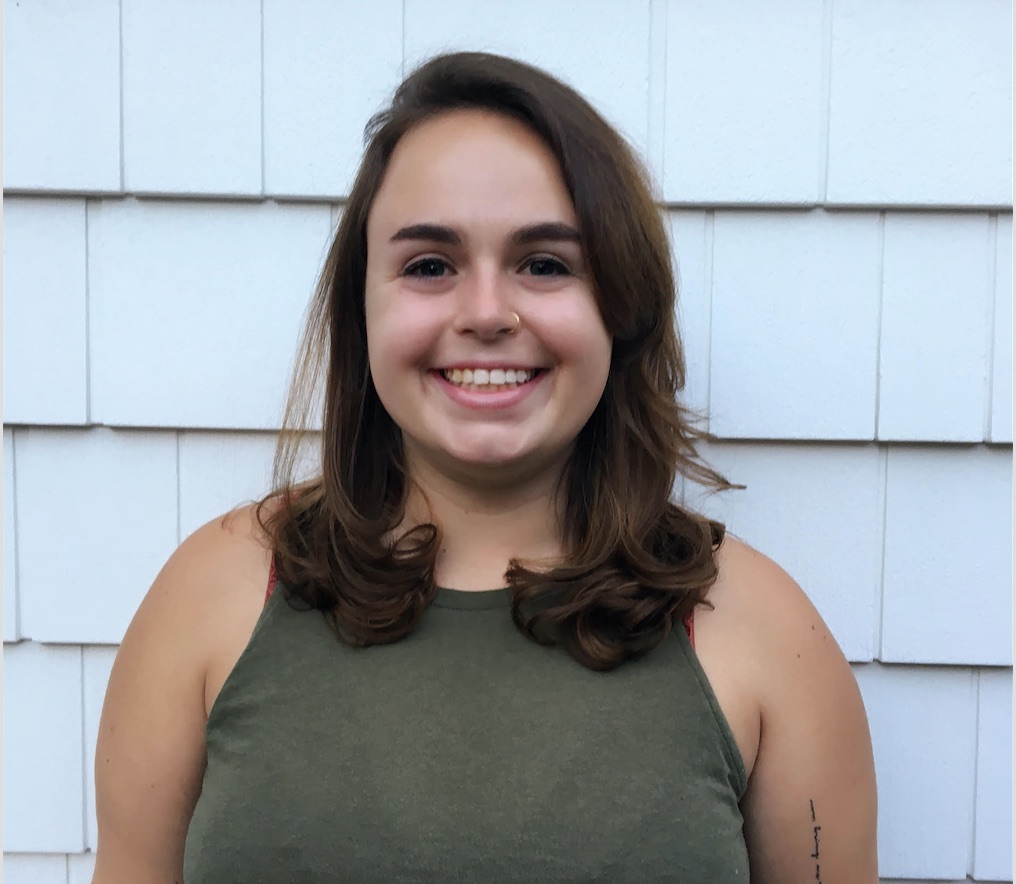 Marissa Nadeau is from the town of Brookfield, Connecticut, and has lived along the East Coast her entire life. Transferring from a university down in South Carolina to one in Connecticut, Marissa ended up receiving her Bachelor of Arts from New York University, majoring in Art History with a double minor in Italian and Creative Writing (2016). During her time in NYC, Marissa interned in galleries and non-profits throughout the Chelsea neighborhood, most notably C24 Gallery and The Kitchen; she helped expand their social media platforms and fell in love with curatorial work by getting the chance to work closely with the team’s curator and contemporary artists. Marissa had the opportunity to study in Florence, Italy, for a semester (2015), which allowed her to adopt a global perspective of museums and the art market.

Marissa uprooted her East Coast ties and moved to San Francisco to follow her passion of pursuing curatorial work, and is currently a Masters candidate in the University of San Francisco’s Museum Studies program. She co-curated Modern Myth: South Asian Modern and Contemporary Works on Paper at the school’s Thacher Gallery in 2017, and has been interning with the Bay Area’s FOR-SITE Foundation since January 2018.

Marissa is excited for her newest role as a Curatorial Intern at the UCSF Archives & Special Collections and she looks forward to gaining a better understanding of archival best practices, while putting her theoretical knowledge to the test. She will be assisting with research, design, and installation of the upcoming exhibit, Open Wide: 500 Years of Dentistry in Art, opening this summer in the Library.