In 1944, the graduating class of the UCSF School of Nursing received a unique gift…a comic book dedicated to their experiences as student nurses.

This homemade book, created by Marjorie Carlson and titled The Adventures of Miss Smith, includes 31 illustrations that parody everything from late-night cram study sessions to overwhelming patient and doctor requests. 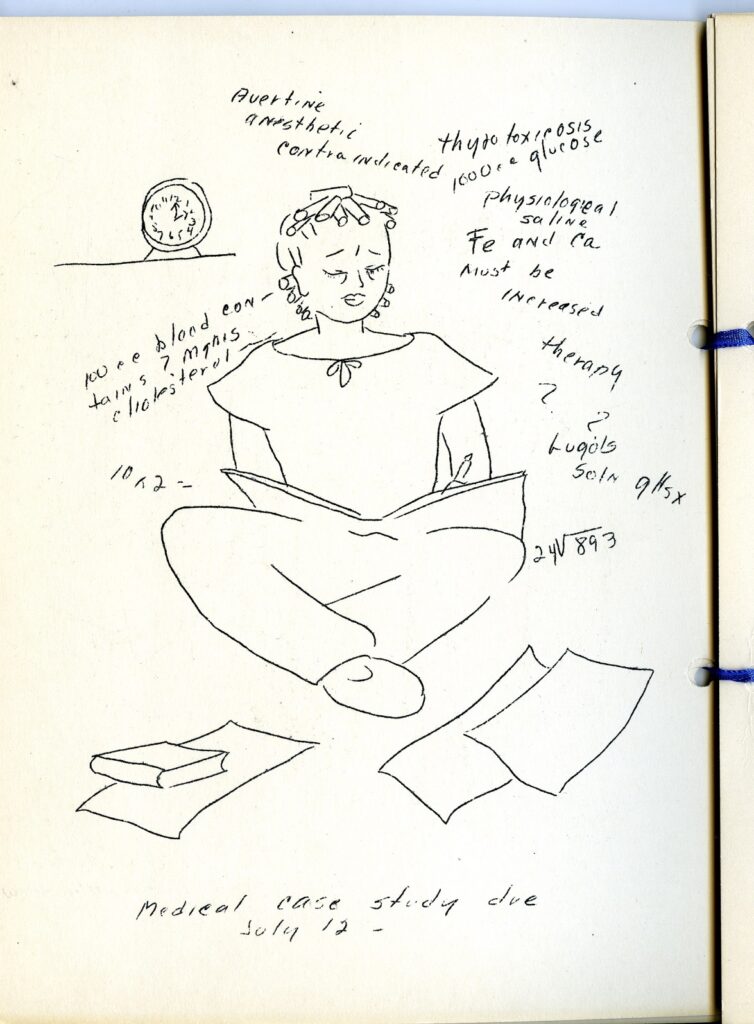 Carlson makes special note of the imposing landscape of Parnassus, a reference to which current students and staff can definitely relate! 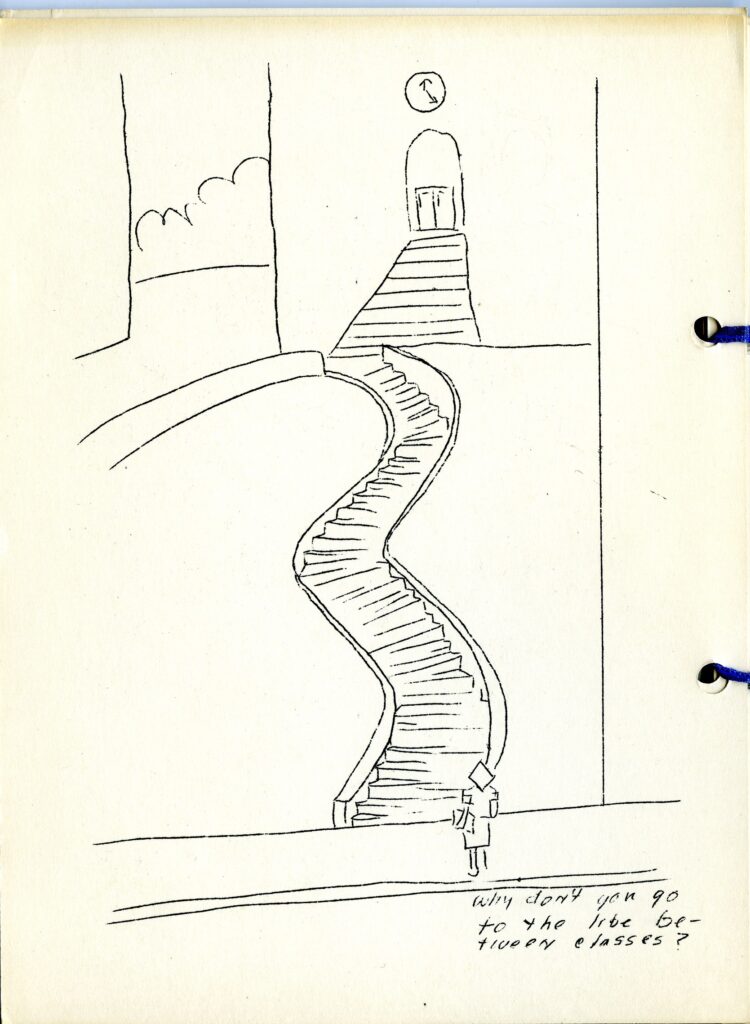 In her introduction, Benson notes that the book “is the realization of an idea one of us had during our pre-clinical semester – to record some of the amusing, humiliating and exasperating experiences we’ve had in training both on and off duty. Each of our twenty-nine class members is represented…these things couldn’t have happened – but they did!” 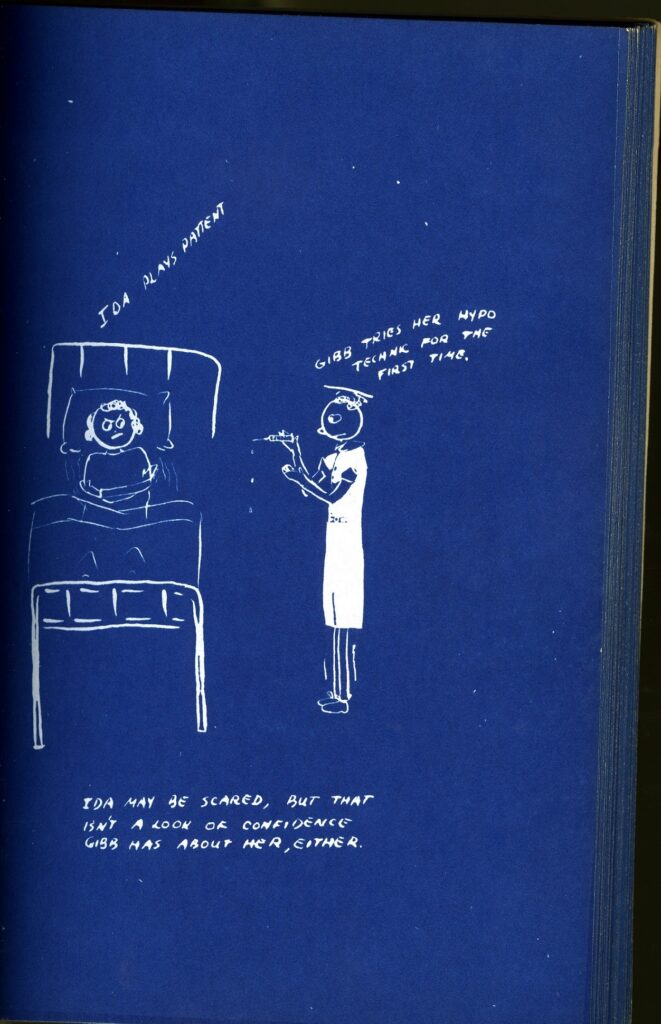 While Benson maintains a humorous tone throughout, she also illustrates some serious issues that mid-century nursing students faced. For instance, five of the twenty-nine anecdotal illustrations reference sexual harassment from doctors and patients. 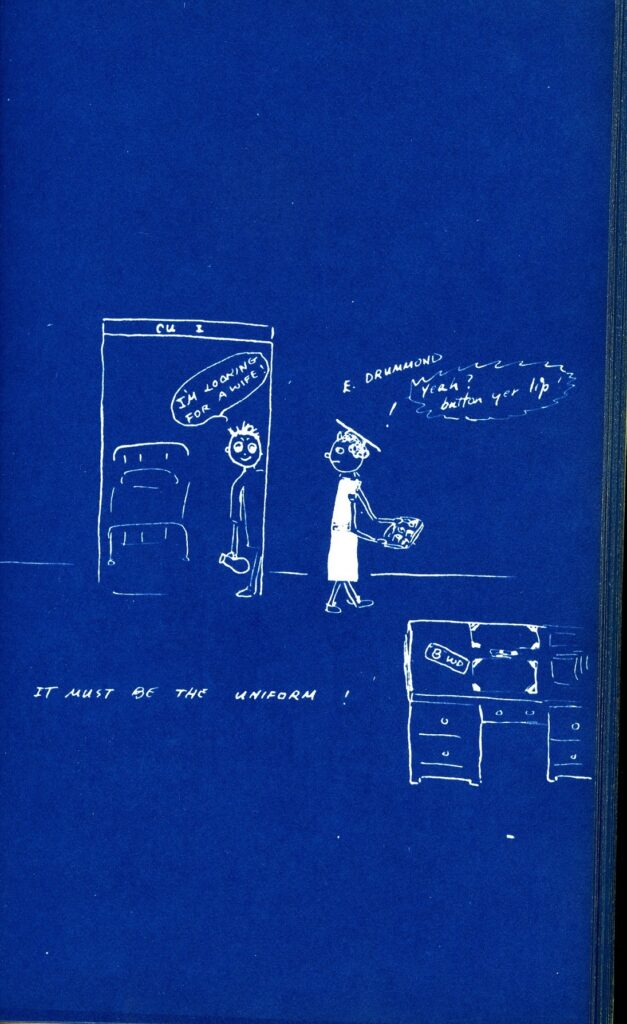 Documents like these provide excellent evidence for researchers looking to better understand students’ lives and experiences. They speak to the history of nursing training at UCSF and showcase unique individual stories. To view more images from the books, visit our digital collections or come see the real thing in the UCSF Archives and Special Collections.

Kelsi Evans
Our new Assistant Research Archivist, Kelsi Evans who joined the archives team a month ago, will help with research and organization for several onsite and online exhibits, as well as processing, cataloging, digitization, and social media projects related to the University sesquicentennial. She will respond to reference requests relating to UCSF History and 150th anniversary, research and provide historical information for UCSF schools and departments. Kelsi will be contributing to the Archives blog and support Archives outreach programs.
She will also spend half of her time completing processing of the Lawrence Crooks Radiologic Imaging Laboratory Records and establishing the Lawrence Crooks Radiologic Imaging Technology Digital Collection.
Dr. Crooks’ collection provides insights into the history of the development and testing of magnetic resonance imaging (MRI) technology. The material donated by Dr. Crooks is a major addition to the archives holdings and is treasured for its high scholarly value and ability to broaden research perspective. Some of these treasures are lacking intellectual control and have no or minimal descriptive data. The goal of this project is to create a detailed finding aid and digitize a sizable and significant part of this material to build a comprehensive on-line collection. The archives will produce an exhibit at the UCSF library showcasing the key documents and artifacts. Subsequently, an online companion exhibit will be built and will be accessible through the UCSF library site.
Kelsi holds a master’s degree in Archives and Public History from New York University and completed graduate coursework in American History at UC Santa Cruz. She has worked as an archivist in the Fales Library and Special Collections at NYU, the Foundation for Landscape Studies in NYC, and the Lowe Art Museum at the University of Miami. Additionally, she has planned events and coordinated volunteers for non-profit organizations, including Old Spanish Days Fiesta in Santa Barbara. Originally from Kansas City, Missouri, Kelsi has lived in the Bay Area for the past several years and enjoys California’s farmers’ markets and beaches. 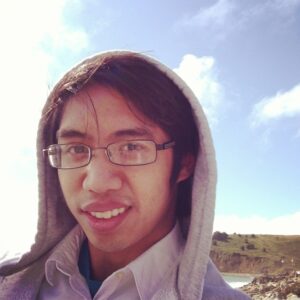 This fall semester the UCSF Archives & Special Collections is hosting an intern from the University of San Francisco (USF) public history program. Armani is currently a senior at the USF majoring in History with an emphasis on European and Asian Studies. He is originally from San Jose, and has lived in California his entire life. After he graduates from USF, he hopes to be able to earn a teaching position at his old high school, Bellarmine College Preparatory, and eventually pursue a Masters. In choosing the UCSF archives through the USF internship program, he hopes to not only practice skills that can only be found through working at an established institution but to also enhance his ability to do archival work and explore history of Western medicine at the archives.
Armani is working on organizing and creating an inventory of biographical files. This frequently consulted collection includes CVs, newspaper clippings, obituaries, bio sketches of hundreds of UCSF researchers, clinicians, staff, and alumni. Armani will also assist with digitizing images and documents for the University sesquicentennial events. 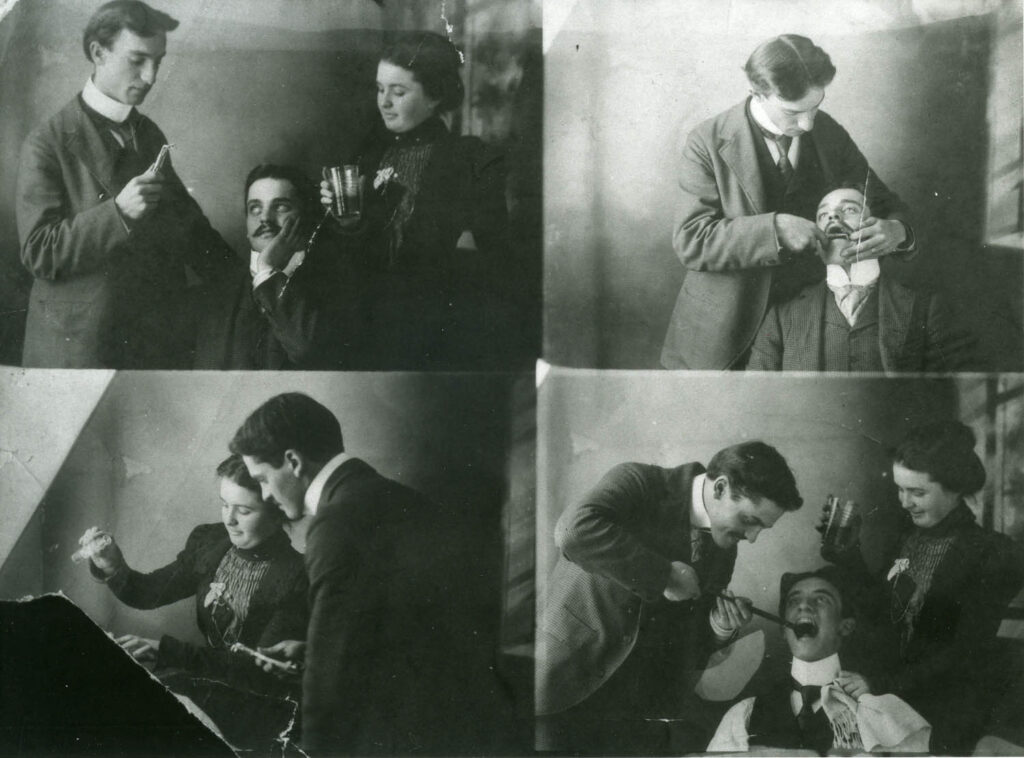 This photograph is comprised of four images of what appears to be a dentistry school demonstration– there seems to be too much smiling going on for a real procedure. Walter French Lillard (mustachioed) of Dixon, California; Maurice Louis Green of Alameda, California; and Anna Christina Frank Wagner of Austin, Nevada graduated from the College of Dentistry in the class of 1901. 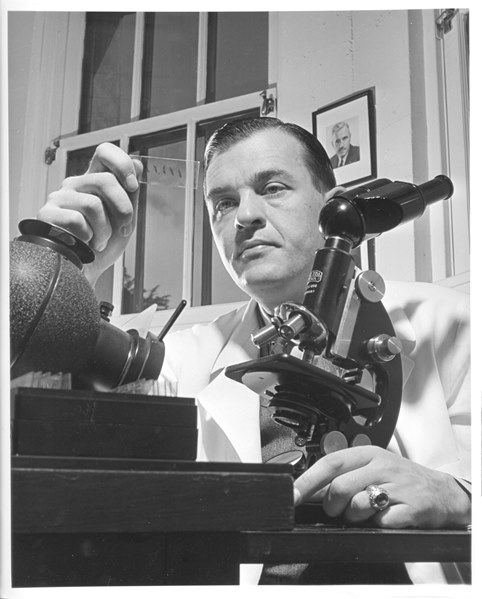 Michael B. Shimkin, Director of the Laboratory of Experimental Oncology at UCSF, 1947-1953

The Laboratory of Experimental Oncology (LEO) was established in 1947 at Laguna Honda Hospital in San Francisco as a “colony” of the National Institutes of Health, to be jointly administered by the National Cancer Institute (NCI) and UCSF. The LEO was the brain child of Michael B. Shimkin, a career U.S.P.H.S. physician and cancer researcher at the NCI. Shimkin was a native San Franciscan, having successively graduated from Lowell High School, UC Berkeley and UCSF. After 8 years at the NCI and war service, Shimkin returned to his native city and alma mater as ideal environments for a “combined” interdisciplinary clinical and basic research unit embedded in a medical school and staffed by full-time research teams of M.D.’s and Ph.D.’s. These unprecedented ideas directly challenged the traditional separation between patient care and laboratory research. Shimkin introduced a ‘release’ form that fully informed patients with terminal cancer admitted to the LEO about the incurable nature of their illness, and clearly distinguished between therapeutic and experimental procedures. This prototypical “informed consent” approach met with mounting resistance from the clinical faculty. In response, Shimkin organized a symposium at UCSF in October 1951 on the subject on human experimentation. In his presentation, Shimkin became the first American physician to draw on the injunctions from the recently concluded Nuremberg trials against German physicians who had conducted medical experiments in Nazi concentration camps, as a source of universal guidelines for the ethical conduct of experiments with human subjects. The LEO treated 500 patients and generated over 130 publications before being replaced by the Moffitt-based Cancer Research Institute in 1953. 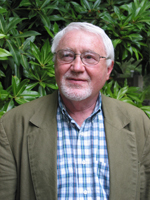 Michael Thaler received his M.D. from the University of Toronto, trained in pediatrics, pediatric pathology and internal medicine, and completed research fellowships in cell biology at Washington University and in developmental biology at Harvard University. As professor of pediatrics at UCSF, he established the first academic division of Pediatric Gastroenterology, Hepatology and Nutrition in North America, was awarded the first NIH Research Career Development Award in Pediatric Gastroenterology, and was P.I. of the foundational NIH Research Training Program grant in Pediatric Gastroenterology. He also directed the Laboratory of Pediatric Hepatology and served as associate director of the UCSF Liver Center.  His publications include approximately 200 clinical and basic research articles on perinatal bilirubin metabolism, infantile cholestasis syndromes, Reye’s syndrome, and bile salt metabolism. As professor emeritus, he earned a M.A. degree in History of Health Sciences at UCSF in 1998, and received appointments as Visiting Scholar at the Stanford Center for Bioethics, and Research Associate at the Stanford Center for History and Philosophy of Science.  For the next 12 years, he taught undergraduate courses on the history of medical sciences as Visiting Professor of History at UC Santa Cruz and UC Berkeley. He continues to lecture at the Osher Life Long Learning Institute in Berkeley, and for the fellowship program in Pediatric Gastroenterology at UCSF.  His awards include the UCSF Chancellor’s Faculty Award for Public Service and the Shwachman Lifetime Achievement Award in Pediatric Gastroenterology. He presently serves as president of   the UCSF Emeriti Faculty Association.

No spoilers here. Click through to see the answers.

If you haven’t seen the crossword puzzles, yet, check out the previous post on the Children’s Hospital of San Francisco Alumnae Association collection.

END_OF_DOCUMENT_TOKEN_TO_BE_REPLACED 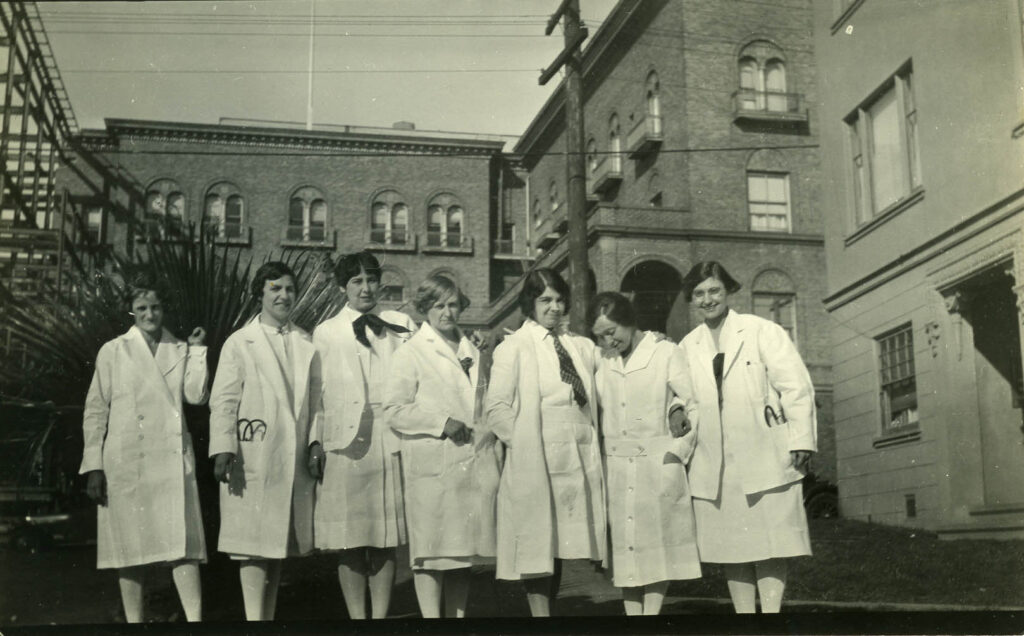 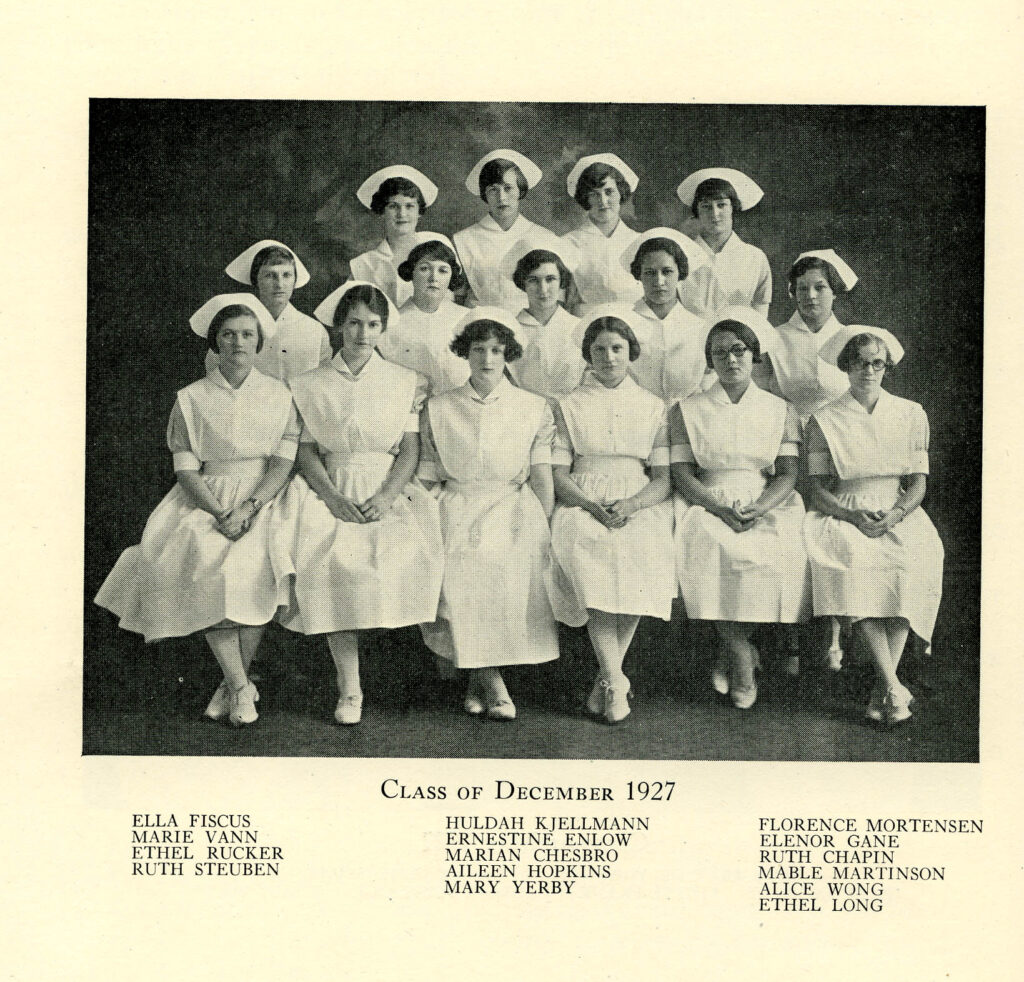 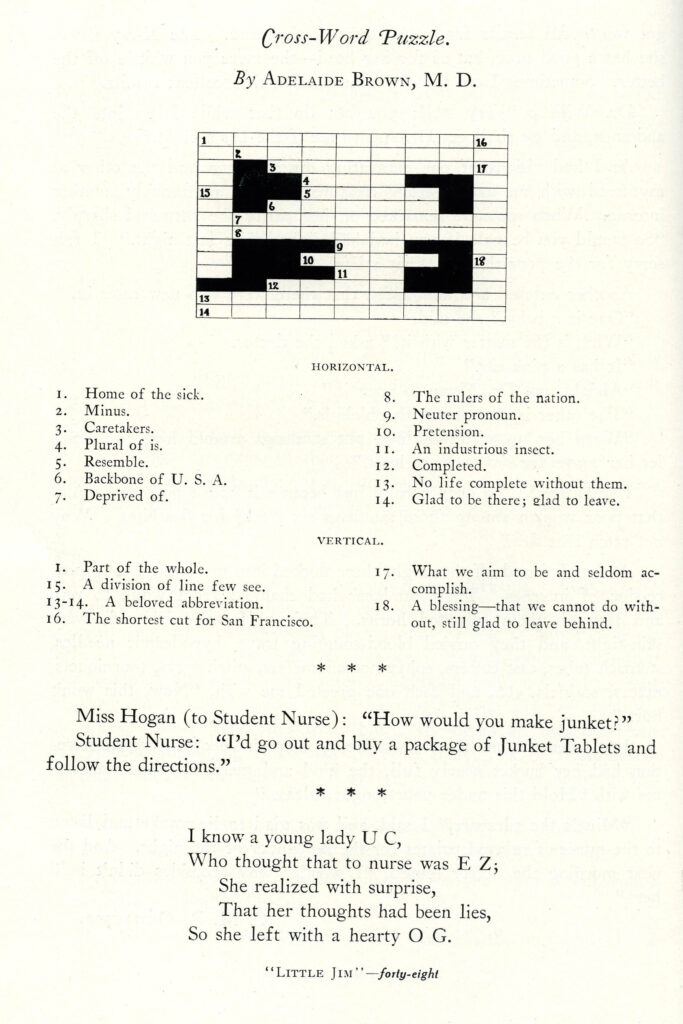