Join us on Thursday, February 26th as Arthur Ammann, M.D., gives a lecture in a series launched by UCSF Archives & Special Collections. 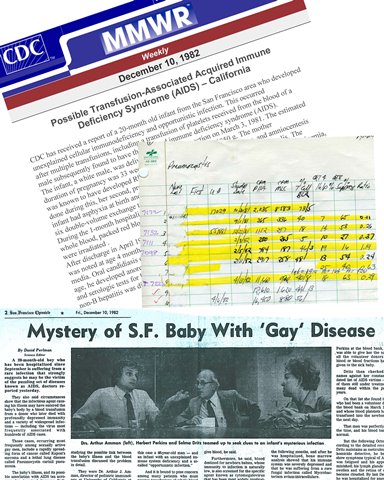 Beginning in 1981 researchers at UCSF defined some of the most important features of the emerging AIDS epidemic – the cause of AIDS, the clinical features of AIDS, populations at risk for HIV infection, methods to prevent and treat HIV, and discovery of HIV. Working closely with community activists, advocates, scientists and policy makers, UCSF distinguished itself as a model of successful collaboration. The first discovery of AIDS in infants and children and blood transfusion associated AIDS at UCSF were instrumental in defining the extent of the epidemic. The scientific advances in HIV/AIDS that occurred over the next two decades were remarkable resulting in the near eradication of HIV in infants in the US and transforming an acute and fatal infection in adults to a chronic and manageable one. But even as these advances occurred benefiting many millions of people worldwide, women and children were too often excluded, resulting in a global epidemic that is now composed of over 50% women and children and a secondary epidemic of AIDS-related orphans that numbers in the tens of millions. 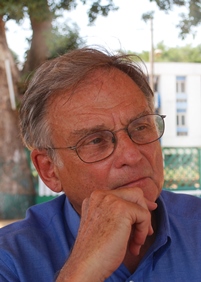 Arthur J. Ammann, M.D., is a founder of Global Strategies, a nonprofit organization that serves women and children in the most neglected areas of the world and Clinical Professor of Pediatrics at UCSF.
From 1971 to 1985, Dr. Ammann was Director of Pediatric Immunology and Clinical Research Center at the UCSF Medical Center, San Francisco. In 1977, Dr. Ammann’s clinical trials of a pneumococcal vaccine resulted in the first FDA approval of a vaccine for bacterial pneumonia and meningitis in children and adults. In 1982 Dr. Ammann described two of the three ways that HIV is transmitted including the first cases of transmission of AIDS from mother to infant and the first blood transfusion associated AIDS patients.
Dr. Ammann has received honors from more than 60 national and international organizations including the United States Surgeon General Award for Research and Heroes in Medicine Award by the International Association of Physicians in AIDS Care.
Dr. Ammann has authored over 300 scientific papers which have appeared in major medical journals. He holds a Bachelor of Science degree in biology from Wheaton College (1958) and a doctor of medicine degree from New Jersey College of Medicine (1962).  He received residency training from the department of pediatrics at UCSF and fellowship training in immunology from the University of Minnesota Medical Center and the University of Wisconsin Medical Center.
Dr. Ammann’s oral history,“Pediatric AIDS Immunologist: Advocate for the Children” is accessible online and at the UCSF Library.

In the 1930s California’s rapid population growth and the incursion of agricultural settlers into valleys and deserts teeming with exotic pathogens resulted in outbreaks of “new” infectious diseases. To divine the cause of these outbreaks and trace the epidemics to their source, health officials turned to San Francisco’s premier “microbe hunter,” Karl Friedrich Meyer.

Drawing on Meyer’s papers at the UCSF and Bancroft libraries, this talk reviews Meyer’s feats of microbial detection and his pioneering investigations of disease ecology. Dr. Honigsbaum views Meyer as an important bridge figure in mid-20th century medical research who sought to link microbial behavior to broader environmental and social factors that impact host-pathogen interactions and the mechanisms of disease control.

About the UCSF Archives & Special Collections Lecture Series: This lecture series was launched to introduce a wider community to treasures and collections from its holdings, to provide an opportunity for researchers to discuss how they use this material and to celebrate clinicians, scientists, and health care professionals who donated their papers to the archives.

Find out more about upcoming lectures, past presentations, and links to more lecture videos here! And please, join us for the next one– coming soon in 2015!

For the next year, I’ll be processing the records of the Radiologic Imaging Laboratory (RIL), 1969-2000. This laboratory pioneered advancements in magnetic resonance imaging (MRI) and helped develop technology that’s now used in hospitals and clinics throughout the world. The collection showcases bioengineering in action and highlights the relationships among industry, research, and education at UCSF. 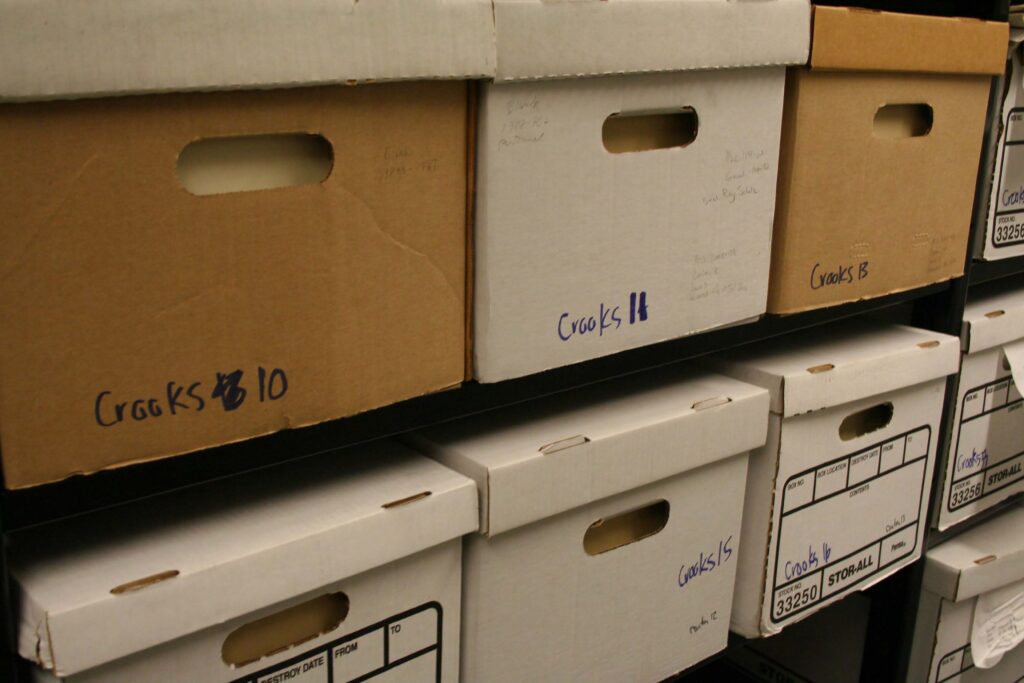 In process boxes from the RIL records.

RIL founder and electrical engineer Lawrence E. Crooks gifted the collection to the archives in the early 2000s. It includes over 80 cartons of material ranging from lab notebooks with early scan images to patient records and marketing presentations. 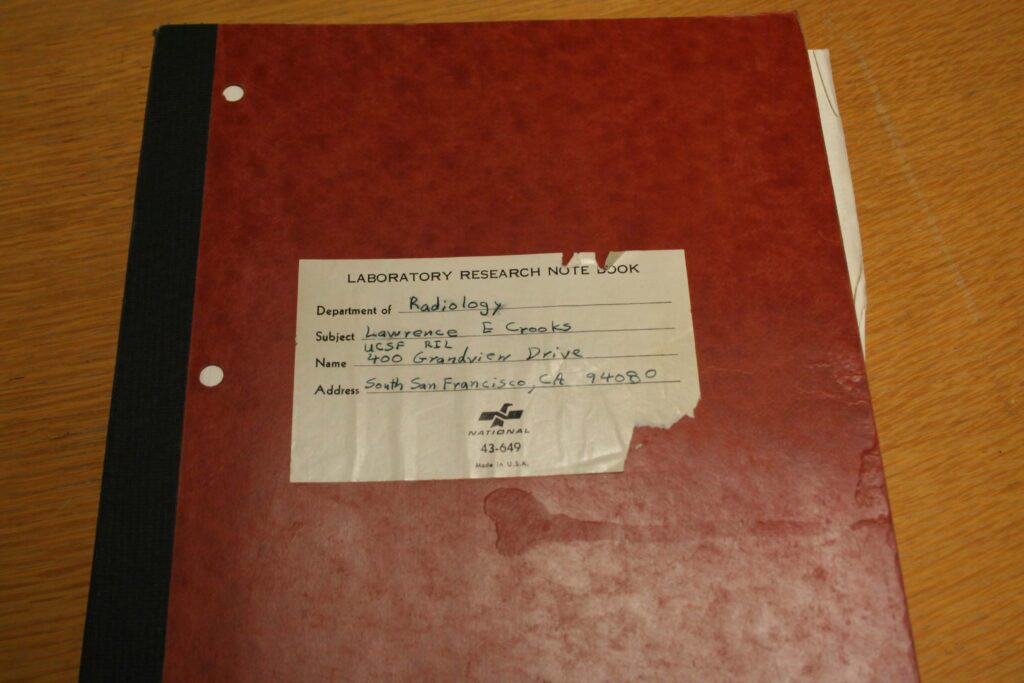 The material traces the RIL’s growth through different funding agencies and corporate affiliations, including Pfizer, Diasonics, and Toshiba. There are even some personal items, like photographs of lab members celebrating Mardi Gras during a conference in New Orleans! 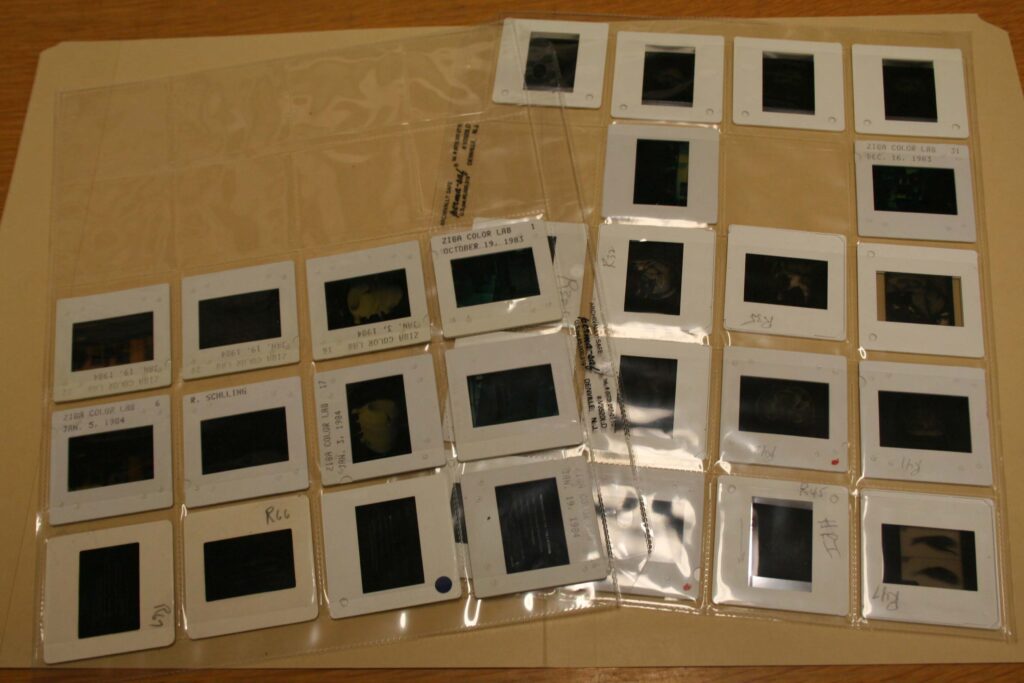 In process marketing slides from the RIL records. The collection includes slides, Polaroids of scan images, negatives, and photographs.

Currently, the collection is cataloged (MSS 2002-08) and has a preliminary inventory, though much of the material lacks intellectual control. My goals are to complete the collection’s processing, create a detailed online finding aid, and digitize a large portion of the material. I will also help curate an exhibit at the UCSF library and a companion online exhibit. 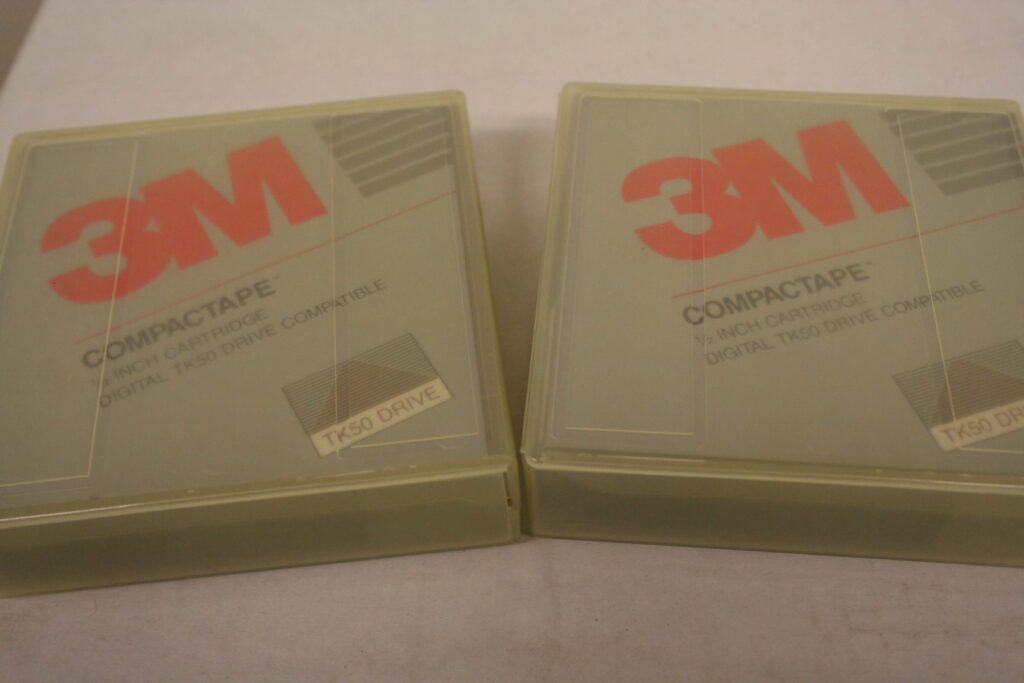 In process tapes from the RIL records. The collection includes tapes, floppy disks, and videotapes.

I’m really excited about the project and hope that it will help users better access the material. The collection is rich in research potential and I can’t wait to see the unique projects it inspires.

We’re always busy accepting new collections and pushing through our backlog to make as many collections available for research as possible. This long list of new catalog records includes materials relating to tobacco control, UCSF, neurology, nursing education, HIV/AIDS organizations, pharmacy, medical librarianship, pediatric diabetes, and more. Click on the titles below to learn more the contents, subjects, and size of these collections.

Contact us if you have any questions or would like to learn more. And please don’t hesitate to use the calendar on the right to make an appointment to come in and use the collections!

Our catalog updates over the past six months: