Exhibit opening and Archives talk: “DO THE BEST FOR OUR SOLDIERS:” University of California Medical Service in World War I.

This event is free and open to the public. Light refreshments will be provided.
REGISTRATION REQUIRED: http://calendars.library.ucsf.edu/event/3321575 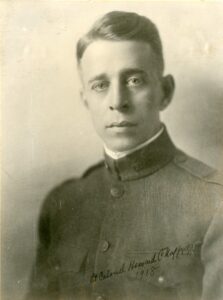 The UCSF Archives and Special Collections is pleased to announce the opening of a new exhibit at the UCSF Library, “DO THE BEST FOR OUR SOLDIERS:” University of California Medical Service in World War I.  The exhibit commemorates the centennial anniversary of US involvement in World War I and recognizes the service of UCSF doctors, nurses and dentists at Base Hospital No. 30 in Royat, France. It also highlights the war-related research and care provided by UCSF scientists, clinicians, and healthcare workers in San Francisco and abroad.

Join UCSF Archives & Special Collections for guided tours of the exhibit and an afternoon talk with Drs. Morton G. Rivo and Wen T. Shen. Dr. Shen will speak on the biography of Dr. Howard C. Naffziger. Lieutenant Colonel Howard C. Naffziger, a prominent neurosurgeon before the war, served in the Army Medical Corps in France and at home, as Chief of the Neuro-Surgical Service at the U.S. Army Letterman General Hospital located in the Presidio. Naffziger became the Chair of the first Department of Neurosurgery at the University of California in 1947.

In April 1917, when America formally entered World War I, the United States Army had 86 dental officers, the US Navy, even fewer. Dr. Rivo will discuss the contributions of the UCSF Medical and Dental Schools that helped to quickly establish extensive dental/maxillofacial services on the Home Front and with the American Expeditionary Forces in France. He will address the role of dentists and oral surgeons, both in the US as the military mobilized, and in France, during the ensuing brutal year and a half of combat which terminated in November 1918.

This exhibit was curated by Cristina Nigro, graduate student from the History of Health Sciences  Program, UCSF Department of Anthropology, History and Social Medicine.

Morton G. Rivo, DDS
Dr. Rivo received his dental education at SUNY Buffalo. He continued his specialty training in Philadelphia and Boston, first as a Fellow in Periodontology at the Graduate School of Medicine of the University of Pennsylvania and then as Resident Fellow in Periodontology and Oral Medicine at the Beth Israel-Deaconess Hospital in Boston. Dr. Rivo served as a Captain in the US Army Dental Corps in France, stationed near the old World War 1 battlefields.

After practicing for several years in Buffalo, Rivo transferred his clinical practice to San Francisco where he subsequently worked and taught periodontics for over 30 years. He is the former Chief of Periodontics at UCSF Medical Center/ Mt. Zion Hospital and was a member of the Medical Staff at California Pacific Medical Center. Dr. Rivo is past-president of the American Academy of the History of Dentistry. He is also the past-chair of the Achenbach Graphic Arts Council at the Fine Arts Museums of San Francisco.

Dr. Rivo has retired from the practice of periodontology and currently is a student at the Fromm Institute at the University of San Francisco, where he is studying art, music, history and philosophy.

Wen Shen, M.D.
Wen T. Shen, M.D., M.A. is an endocrine surgeon specializing in procedures for thyroid, parathyroid and adrenal gland surgery. His research focuses on the molecular biology, genetics and treatment of thyroid cancer as well as the use of minimally invasive surgery. Shen also has an interest in medical history and has studied the development of hormonal therapies for benign and malignant conditions and the impact of the 1942 Coconut Grove Fire in Boston on the evolution of surface treatment for burns.

Our Medical Artifact Collection includes some pretty amazing items. For instance, the 19th-century medical kits always impress, with their vibrant satin and velvet linings and beautifully crafted (though not necessarily sanitary) instruments.

One highlight is this 19th-century skull and brain surgery kit created by Arnold & Sons, a London-based surgical instrument manufacturer. The kit includes a trephine (with multiple saw bits), forceps, bone brush, and head saw known as a Hey’s saw. 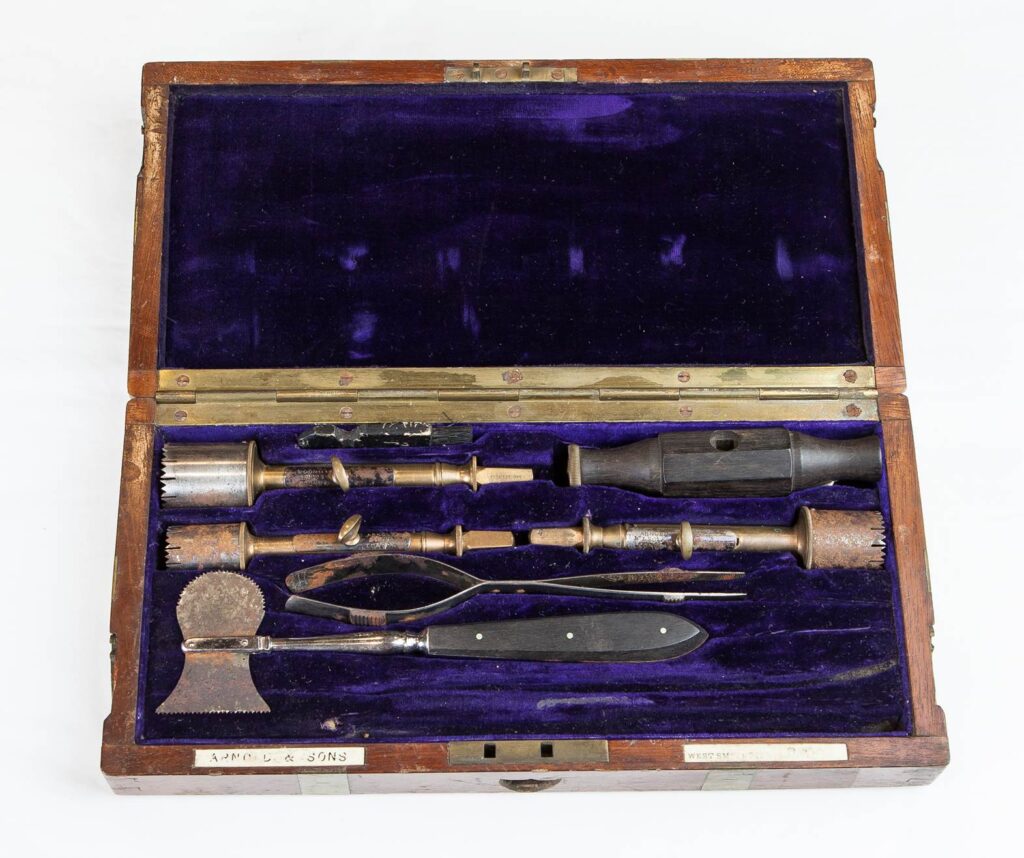 A trephine is a T-shaped, hand-operated drill saw with a cylindrical blade. It would have been used to bore holes in the skull, allowing for the removal of bone and access to the brain. This kit includes multiple saw bits of different sizes. 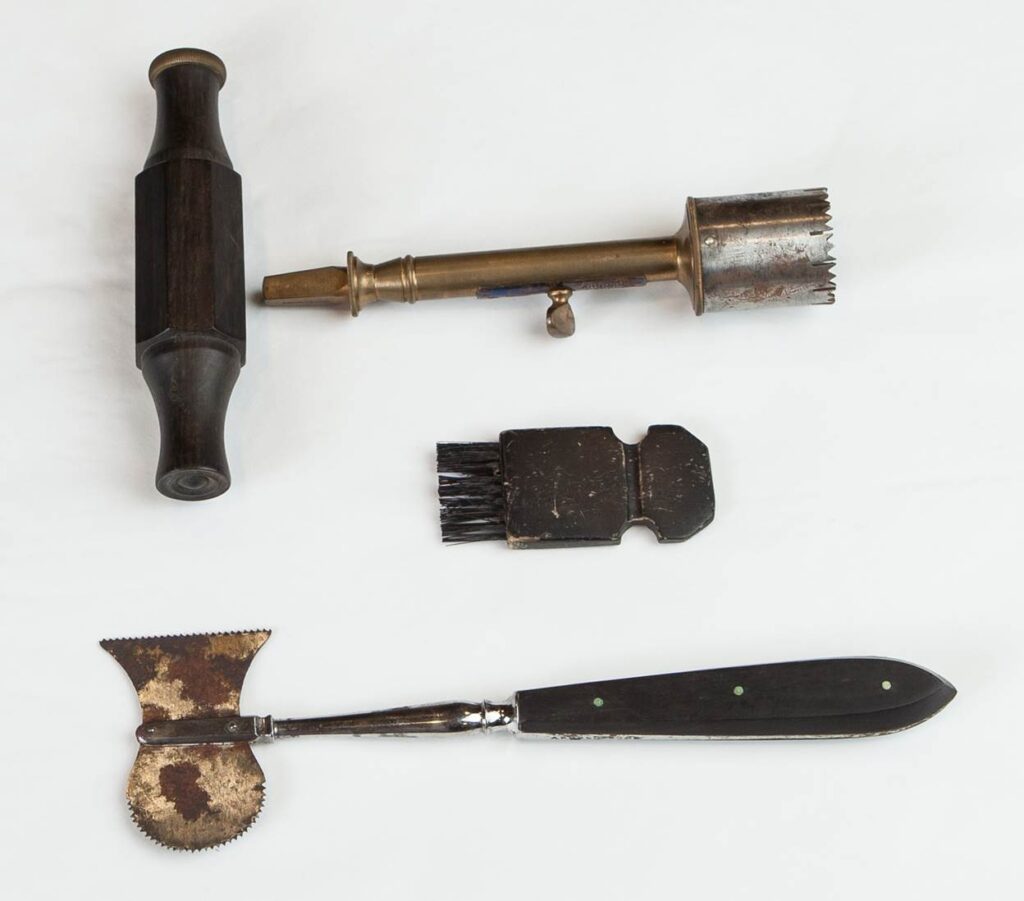 A Hey’s saw is a double-bladed instrument that, thanks to its unique design, allows for variously angled cuts. It is named after William Hey, an English surgeon who helped refine the tool.

If you would like to see this, or any of our artifacts, in person, please make an appointment with the UCSF Archives and Special Collections.