The UCSF Industry Documents Library (IDL) is a division of the UCSF Archives.

The ‘UCSF E-Cigarette Web Archive’ is a resource created to assist researchers and the public in understanding the history of e-cigarette marketing on the Internet. 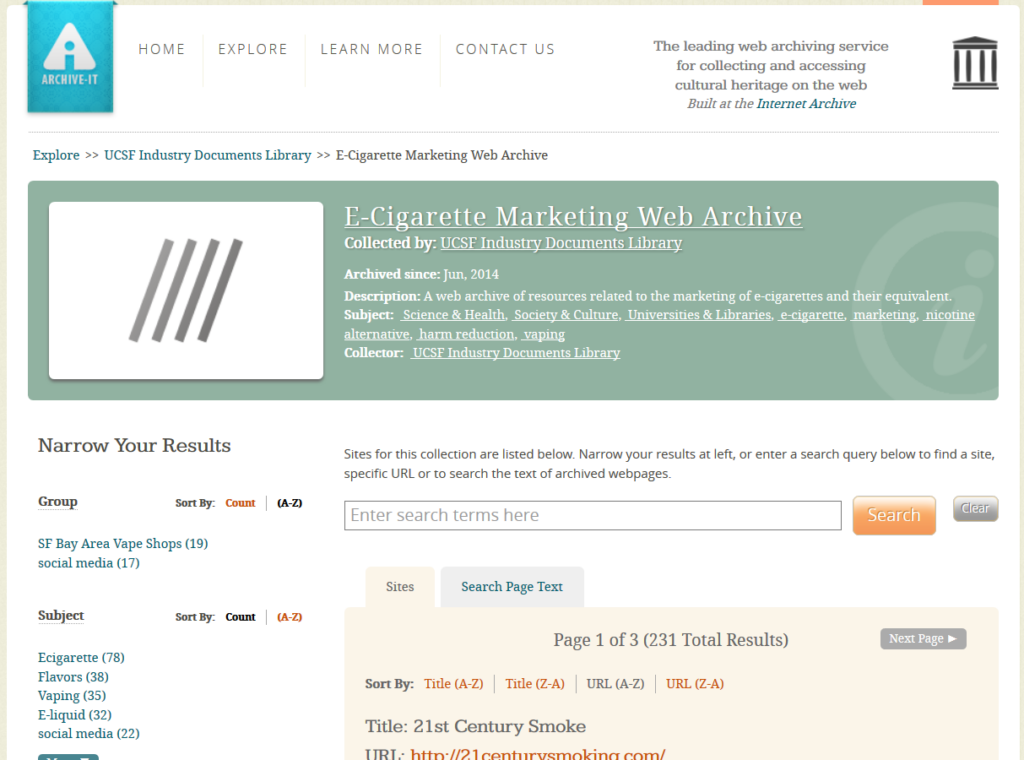 The UCSF Industry Documents Library primarily collects internal documents from industries and corporations that attempt to influence policy and regulations meant to protect public health.  In addition to our IDL holdings in tobacco, drug, and chemical industries, we capture and preserve websites and online multimedia resources that further demonstrate the actions of these large industries.  The rise of vaping and e-cigarette use over the last 10 years has undone some of the gains in tobacco control and youth smoking prevention won by the public health community.  The marketing tactics and messaging of the e-cigarette companies mirror that of the tobacco industry 20 years ago and the IDL is attempting to capture and preserve these campaigns for future research and analysis.

Preserving sites over a number of years allows researchers to see trends in advertising campaigns and marketing.  For instance, in 2014, Blu was urging users to Take Back your Freedom but in 2017, authenticity was the key with e-cigarettes helping you “Be Who you Truly Are”.

These web archives provide an historical perspective on the evolution of e-cigarette marketing and continued captures will hopefully preserve the industry’s shifts in language, imagery and tactics before and after any possible regulatory actions by jurisdictions.

This post highlights just a few of the over 14 million tobacco industry documents contained in the UCSF Truth Tobacco Industry Documents, a division of the UCSF Archives.

Could a sporting event like the Olympics ever equate with smoking? The games summon images of stamina, health, fortitude and strength, and for decades, the tobacco industry worked diligently to affiliate themselves with this major sporting event. Olympic games draw millions of eyes and the promotion and marketing opportunities were gold for the tobacco companies. 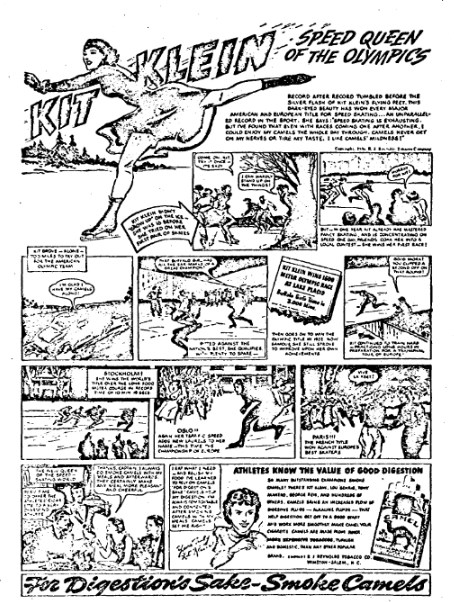 Since 1988, each Olympic Games has adopted a tobacco-free policy but the tobacco industry has continued to create indirect associations in an effort to be connected with not only Olympic ideals but the worldwide platform the Games provide.

The Olympics as a powerful promotional tool: A 1980s memo in our British American Tobacco (BAT) records indicates executives considered the Olympics second only to Formula One motor racing as an effective sports-based “marketing platform.”  Into the 1990s, BAT affiliate UZBAT proudly proclaimed BAT sponsorship of Lina Cheryazova, 1994 Olympic Gold Medalist in freestyle skiing; and a 1992 memo between BAT and Singapore Tobacco Company, Korea, notes proposed Olympic team sponsorship in Thailand is illegal but ‘primary’ sponsors have been used as cover in the past. 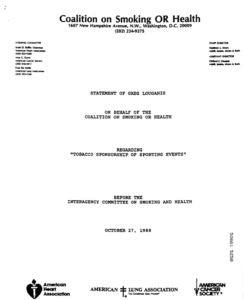 The tobacco companies were so heavily invested in advertising and marketing around sporting events they could not risk censure from athletes. In a 1988 statement by Greg Louganis regarding tobacco sponsorship, the Olympian confessed, “I had become a slave to a tobacco company…Philip Morris representatives made it very clear that if I continued to speak out nationally [about tobacco and health], my career at, and association, with Mission Viejo [Realty Group, a PM subsidiary] would be over.”

The 1996 Centennial Olympic Games, Atlanta, Georgia:
Documents in our Philip Morris and RJ Reynolds collections demonstrate that despite the almost decade long tobacco-free policy of the Olympic Games, the companies were still planning promotions and marketing events. A 1996 Philip Morris memo shows the tobacco giant crafted a contract to place a Benson & Hedges ad on the back cover of the Ultimate Games Guide, a souvenir program of the 1996 Olympic Basketball games in Atlanta. Similarly, a 1995 RJ Reynolds email discusses a new tobacco company whose products could be introduced at the Games with catchy brands like Torch and Gold Medal, even going so far as to posit an “official cigarette of the 1996 Olympics.”

The “accommodation” of Olympic visitors who smoke was a hot topic in 1996 and one that allowed the companies to roll in promotional and marketing activities.  “Accommodation programs” were the tobacco industry’s way of holding off smoking bans by partnering with hospitality agencies (hotels and restaurants) to promote “choice”, “preference” and often the “solution” of improved ventilation in order to accommodate both smokers and non-smokers in public areas. 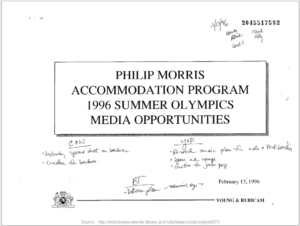 You can view these documents and millions more at the UCSF Industry Documents Library, where we collect and make available internal corporate documents produced by industries that distort science in an effort to influence policies meant to protect public health.