Many of us would assume that the vegetarian diets and other trends in eating one hears of so often lately are a more recent fad– a preoccupation brought on by modern life. Or, especially for those of us in the San Francisco Bay Area, we’d perhaps date them to the 1970s. However, a pamphlet from the George Williams Hooper Foundation Administrative Records, 1882-1958, collection number AR 59-1, shows us that like many ideas, vegetarianism has been around longer than we have.

The following issue of The Vegetarian and Fruitarian from March 1932, published in Lewiston, Idaho, promotes ethics, ideals, culture, health, and longevity. It describes itself as “a fund of information as to ethical and physical reasons for choosing meatless foods– for an argument or debate this booklet fits in nicely– giving ammunition for proving that vegetarianism is sound and logical.” 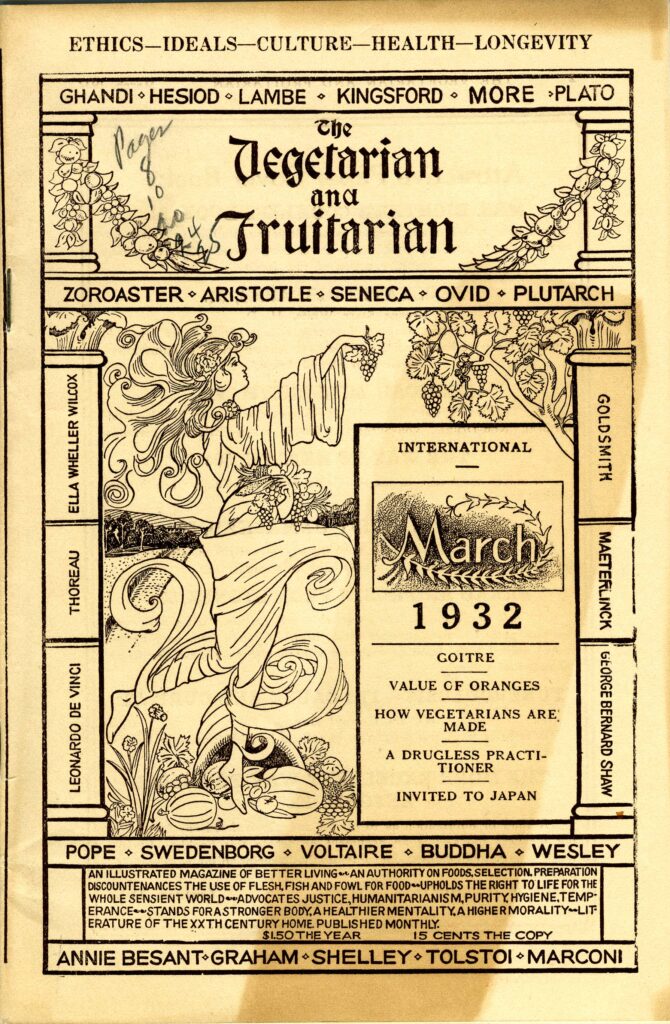 The Vegetarian and Fruitarian, March 1932

At the time, the vegetarian and raw food movements were, in part, tied to feminism. It was viewed as a way to free women from the confines of the kitchen and allow them to pursue other activities and interests. Notice the brief article “Vegetarian Soups for the Hurried Housewife” below on page 16. In the lower right hand corner of page 17, “Places to Visit When in Los Angeles” recommends raw food living “if you are wedded to the cook pot and would like to know of something different.” Similar to various lifestyle publications and articles today, it goes on to advise a vegetarian-friendly guest house in the area. Other vegetarian recipes appear across both pages such as Mock Hamburger– the parenthetical note for which is particularly interesting. 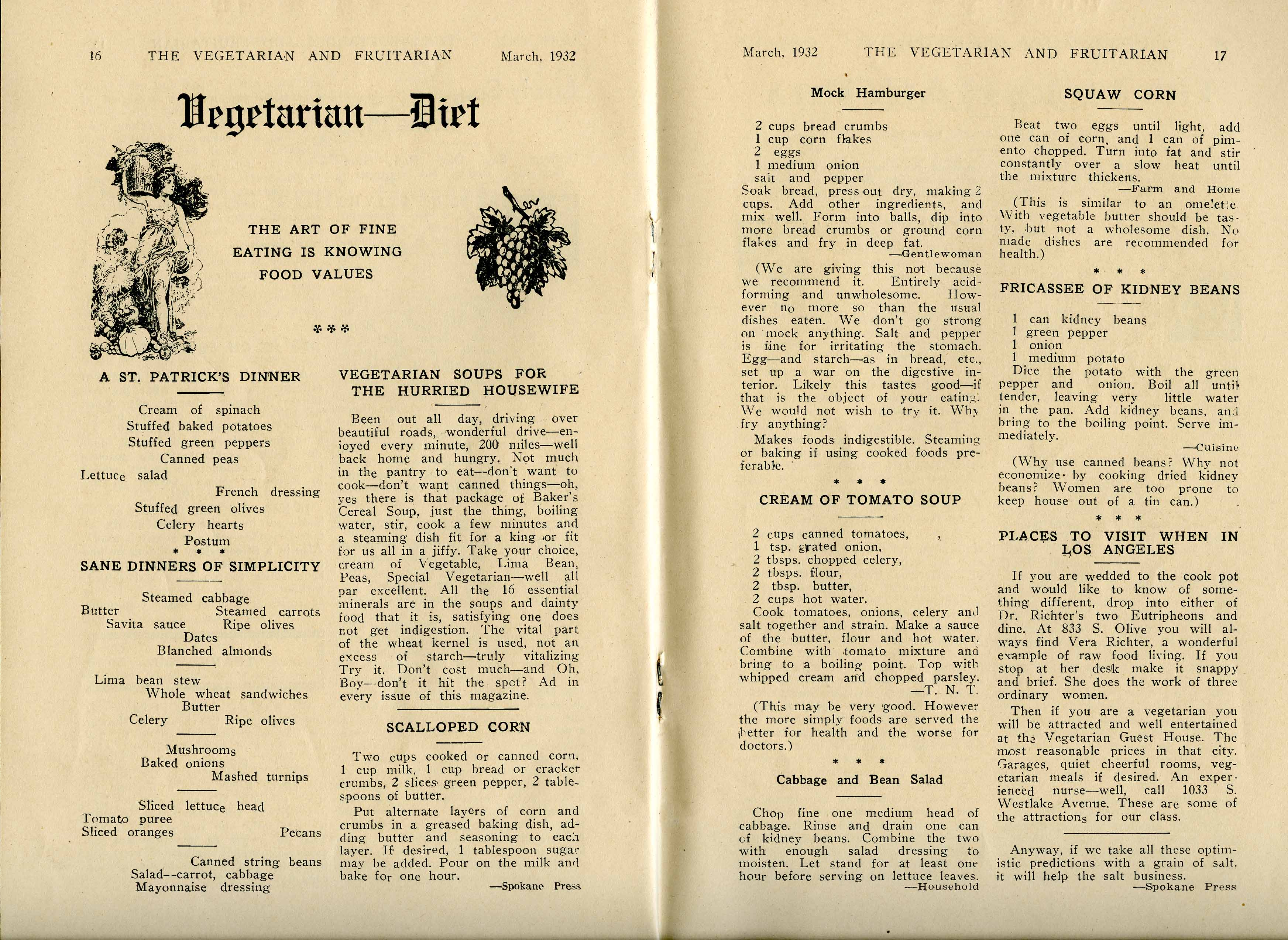 Pages 14 and 15 give voice to two other current food and health trends that have history in the early 20th century– carbohydrates as devil and raw food. A Texas subscriber wrote in that she believed that the raw food diet had cured a number of her family’s ailments, including one of her daughter’s bad tonsils. The article on page 15, “Lowly Spud Seeks Help,” attempts to make a case for the healthfulness of potatoes to help bolster decreasing potato sales. It says, “Women have a mistaken idea. Potatoes, it is claimed, do not round out the figure.” 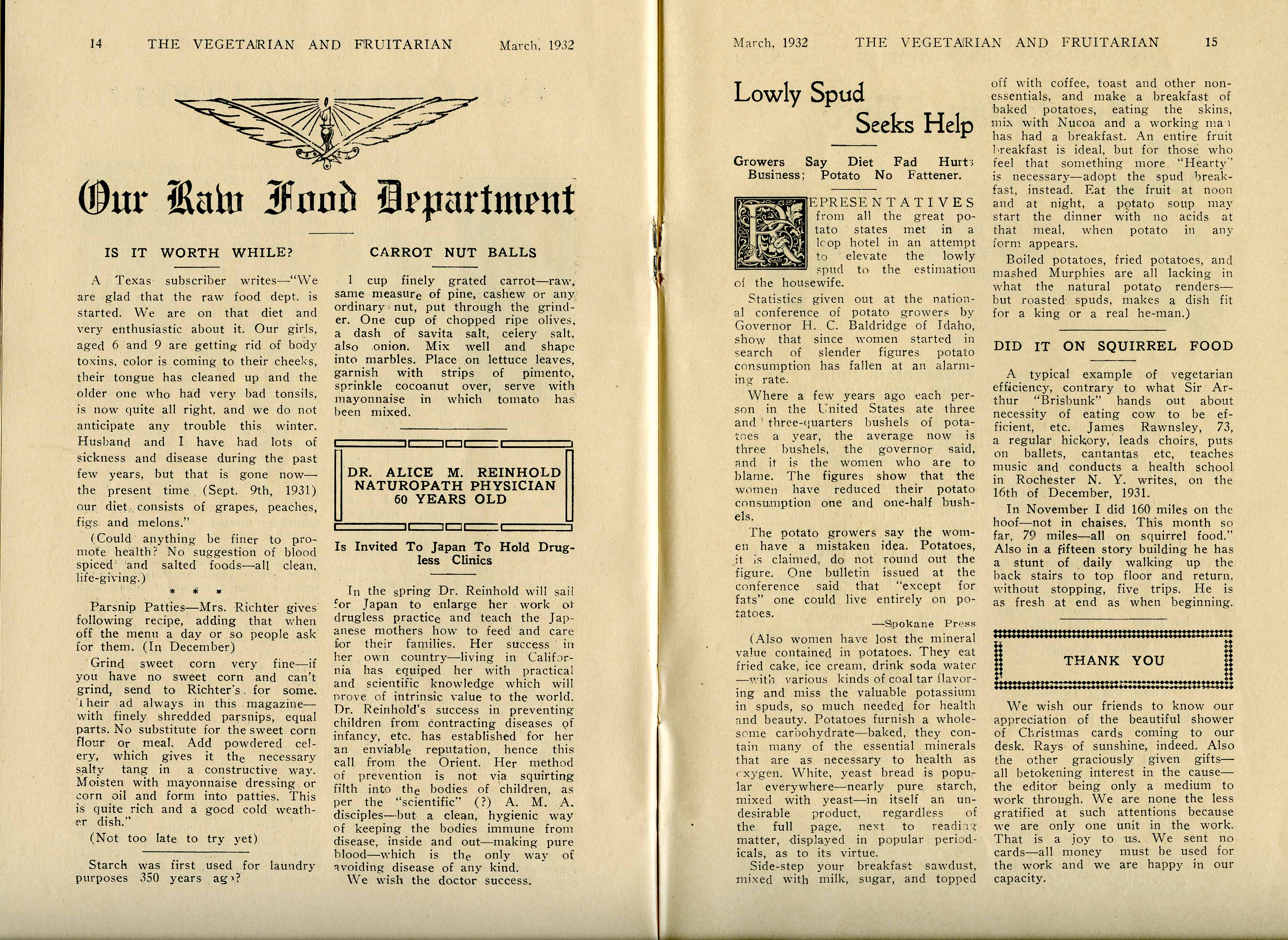 For more information on the George Williams Hooper Foundation please see a brief history of the organization on the UCSF History Website and their current website. I’d also like to point you toward the post on Slate’s The Vault blog about 19th Century Vegetarian Personal Ads, which I found quite interesting.