I spent most of last week down the peninsula for the convening of the Personal Digital Archiving (PDA) conference, now in its 7th year, and left with some fascinating thoughts and conversations in my mind. PDA “seeks to host a discussion across domains focusing on how to best manage personal digital material, be it at a large institution or in a home office.” As a result of this focus, it also ends up playing host to all kinds of fascinating new practices and approaches to collecting, preserving, providing access to, and even thinking about personal digital information. 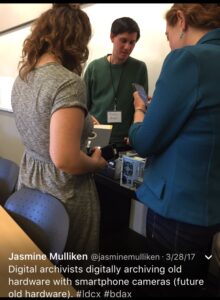 A moment from the Born-Digital Archiving pre-PDA meetup, where archivists hover around a computer built to read 8 inch floppy disks — an almost impossible task these days

The conference covered a huge range of work, and included presentations on different ways to conceptualize digital space (screenshots, video game emulations, the list goes on), projects seeking to allow communities to directly transfer their digital materials to a library collection through apps or interfaces, and even a fascinating assessment of the way that teens store and access information about their personal finances (including the clincher that almost all ages show a tendency to simply discard financial information after a stated financial goal has been reached). Also included were some updates on the sustainability (or lack of it) of some of the field’s pioneering digital archives projects, like the Salman Rushdie papers at Emory University (hint, it’s still people, not machines, that are making it run).

Some presentations particularly interesting to a health sciences institution like our own were those on the self-collection and assessment of health and other biometric data espoused by the Quantified Self movement. Quantified Self is a loosely-organized group who collect and store data about themselves, and then use various computational and creative methods to analyze that data  for self-insights framed as citizen science. 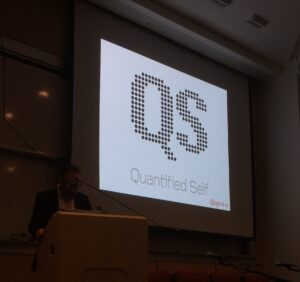 Gary Wolf gives the keynote on the Quantified Self movement.

Quantified Self (the formal organization) has just embarked on its first experiment to facilitate participants testing and analyzing their own blood, which has brought up a host of questions on the ethics of collecting and making public one’s own health data. Additionally, the project raises questions about the freedoms and constraints that tend to coalesce around these projects of “do it yourself” self-quantification (not to mention the often neglected questions around power and privilege that tinge the conversation around collection of, access to, and work with self-referential data). The approach taken by quantified self practitioners is surely different than ours here in the archives, but we still face similar issues as archivists in a health-sciences university, where historical information mixes with personal narrative and private health data – both in the legal sense and the intimate emotional sense as well.

This forum was a fascinating opportunity to dig a bit deeper into the ideologies and practices behind the collection and preservation of personal digital material, and it seemed fitting that these questions were being explored in dialogue with all the people in the room. One of the biggest takeaways from the conference, after all, was that the tools and technologies to facilitate this work are often the focus of the intrigue and excitement, but that it’s the people who dedicate their time and resources to the endeavor that keep the whole thing running. Just as the Salman Rushdie Digital Collection requires the work of a cadre of dedicated digital archivists at Emory, the future of our digital past will require serious work by a broad and diverse community of archivists, technologists, historians, fanatics, and citizens.

One of the final audience comments was prescient in this regard: “it seems like what might be missing is a discussion of privilege in these projects.” Indeed, any community of practice is unlikely to persist for long if it doesn’t contain a diversity of interests.