This is a guest post by exhibit curator Sabrina Oliveros

Open Wide: 500 Years of Dentistry in Art, which formally opens on September 27 with a reception at the UCSF Library, features a wealth of artworks that depict how perspectives on dentistry, and dentistry itself, have changed over the centuries. The pieces range from satires and caricatures to religious prints and anatomical plates, and they come from artists as different and distinguished as George Cruikshank, Honoré-Victorin Daumier, Francisco de Goya, Utagawa Kuniyoshi, and Marc Chagall.

Remarkable as the art may be, they only comprise half the treasures – and tell part of the stories – in Open Wide.

For this exhibit to find its form, it needed to pair art with artifacts. 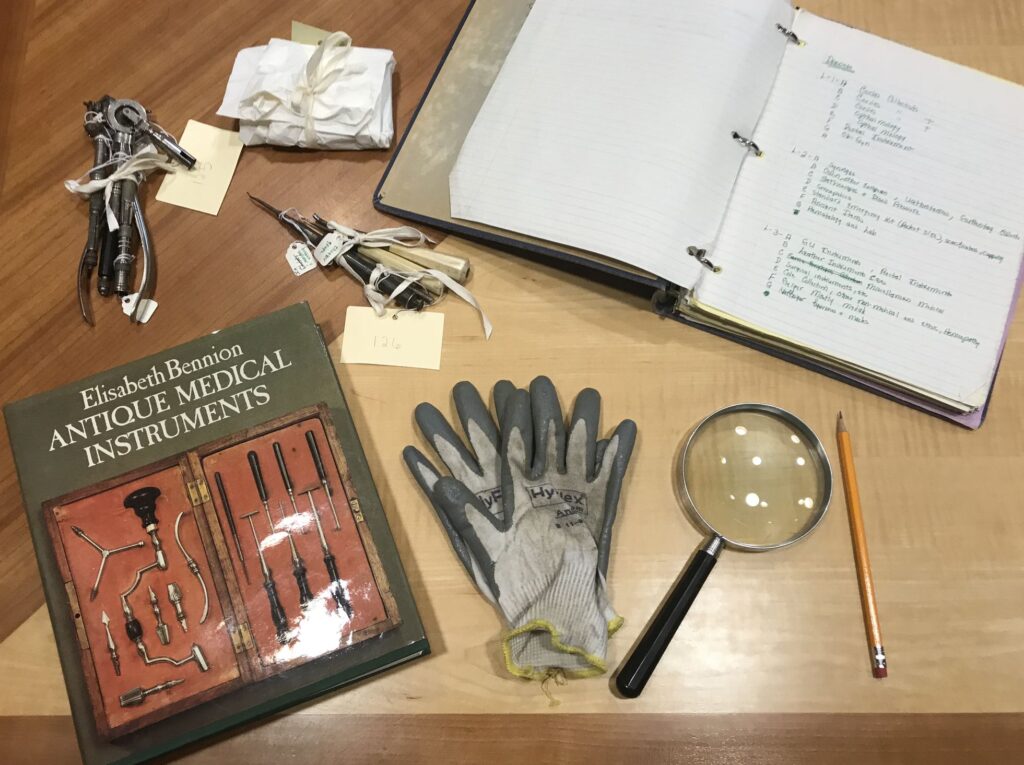 Which artifacts could go on display with which artworks? Early project research meant to answer this question.

Many of the prints in Open Wide had been exhibited from 2003 to 2004 in a show of the same name at the University at Buffalo. When UCSF loaned the artworks from their owner, Dr. Morton G. Rivo, the goal was to expand on the original show using items from Archives & Special Collections. If an artwork illustrated a specific moment in the history of dentistry, the artifacts could elaborate on that moment, helping contextualize what the art showed and turn it into a touchpoint for learning more about the profession.

With some pieces, this task was rather straightforward. The etching Der Zahnzieher (c. 1631-35) by Jan Joris van Vliet (c. 1610 – after 1635), for example, shows a tooth-puller at work; on the wall behind him is a bleeding bowl. Bleeding bowls – which were used to catch drops of a patient’s blood during bloodletting procedures – are among the many historical objects in UCSF’s collections.

Displaying a bowl beside Der Zahnzieher not only added three-dimensionality to the print. It opened an opportunity to discuss why the bowl is in the image and what a tooth-puller used it for (bloodletting was once believed to relieve toothaches). Its presence in the print also suggests that the tooth-puller might have been a barber-surgeon, the kind of tradesman who would have certainly owned such a tool. What is a barber-surgeon and why is this distinction significant in dental practice? Questions and answers can go and on – indicating just how a single artifact can become a gateway into the history of dentistry.

The breadth of UCSF’s collections also allowed for other kinds of juxtaposition.

Take one case on the library’s third floor, which contains the print Easing the Toothach (sic). Created long before anything we now use as anesthesia, the image shows a patient who is in such pain that he pulls off his dentist’s wig during treatment. Antique vials of Novocain and an ether gas mask – forerunners of modern local anesthesia – surround the print. In contrast to the bleeding bowl display, the artifacts here expound on the development of dental practice by showing what is absent from the art, not what is visible in it. 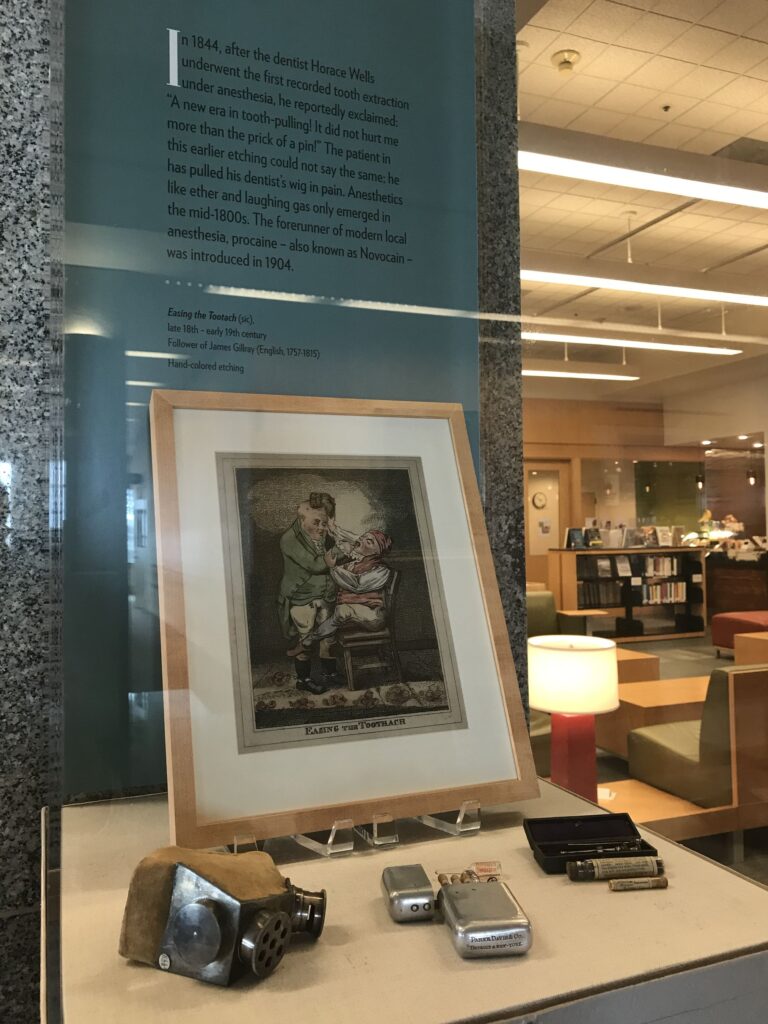 Easing the Toothach (sic), by a follower of James Gillray (1757-1815), is the centerpiece of a display on pain management artifacts.

Another piece on the third floor, the hand-colored engraving Tugging at Eye (High) Tooth (1821), helps showcase a different facet of UCSF’s collections.

The colorful scene, set in a well-decorated dentist’s office, is by George Cruikshank (1792-1878), one of the most prolific artists during Britain’s golden age of caricature and satire. It shows a dentist furiously at work on a hapless patient, surrounded by his books, dentures, and instruments like teeth-scrapers, a mirror, and a mallet. This piece could have been displayed with similar tools in UCSF’s vaults, again lending three-dimensionality to the office Cruikshank depicts. But there was more to be mined from the print.

Cruikshank lined the dentist’s shelves with titles like Miseries of Human Life, Tales of Terror, and Frankenstein – a tongue-in-cheek suggestion of what the distressed patient is going through. Funny as these were, they raised a few questions: what kinds of books would (or should) have been on a professional dentist’s shelves? And which books shaped the practice so patients would become more comfortable in the chair?

Following this line of thought, the case thus features rare books from the 18th and 19th centuries that advanced knowledge about dentistry. They include the first modern textbook on oral surgery, the first work on orthodontics, and the book that introduced terms like molars and cuspids. 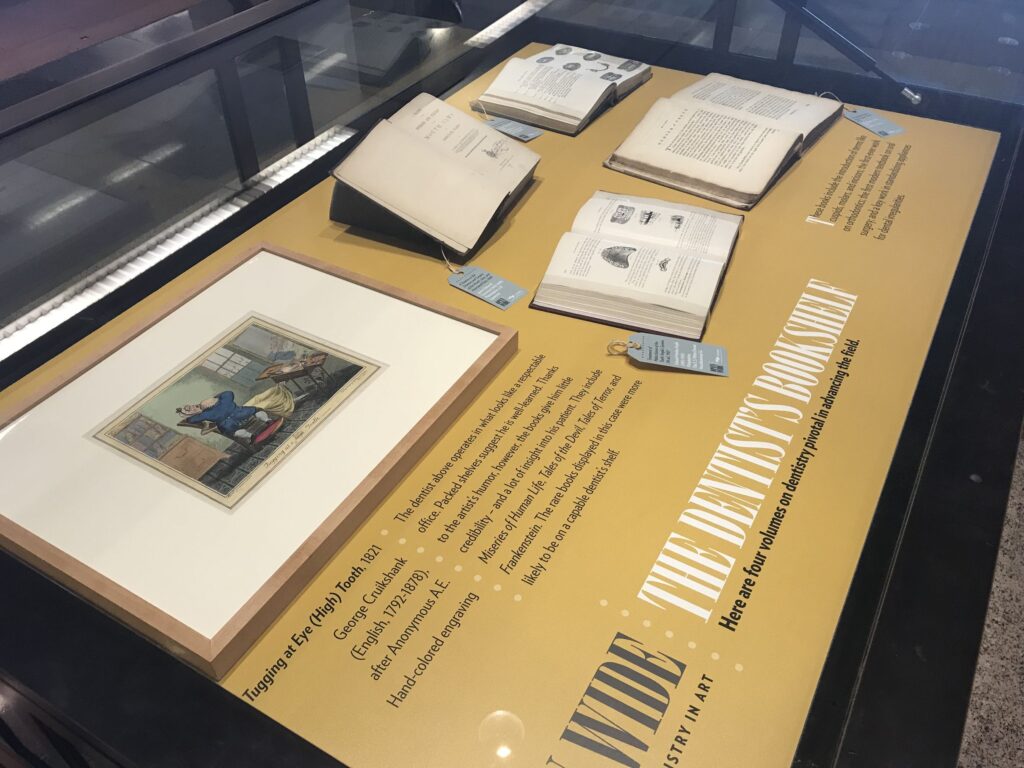 Beyond artifacts and rare books, Open Wide also exhibits selections from UCSF’s Japanese woodblock print and School of Dentistry photograph collections. Yet in a university library’s show about dental art and history, perhaps some of the most meaningful materials from the Archives are yearbooks from the school’s early decades.

The Chaff yearbooks displayed on the fifth floor were published from 1897 to 1909 by the junior class of the UC College of Dentistry. They include some truly eye-catching art: one illustration depicts a procedure as an intense sporting match, complete with a referee, spectators, and blow-by-blow commentary; another shows two patients atop a trophy or pedestal, looking like they barely survived a fight. (Its caption? “Patience on a Monument.”)

Such images proved interesting – and unthinkable not to put on exhibit – because they offer historical records of how dental students themselves viewed their profession. More than that, their perspectives surprisingly echo the wry and comical tone of many artworks loaned for Open Wide.

As far as pairing art and artifacts go, there couldn’t have been a more appropriate match than that. 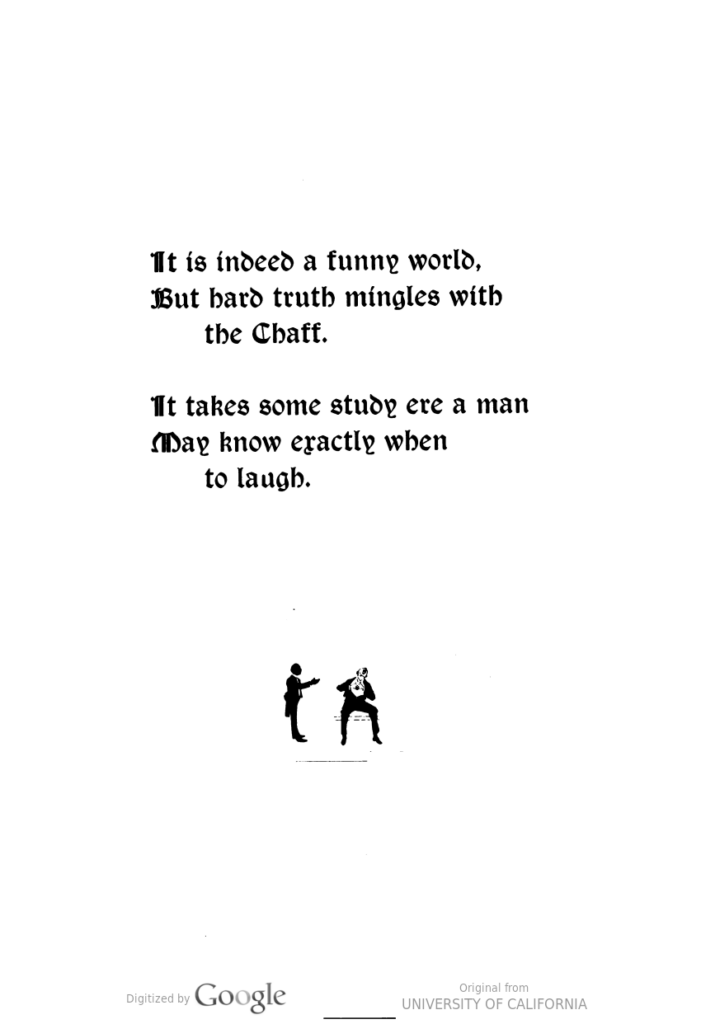 A verse from the 1900 volume of Chaff helps explain the spirit behind some yearbook art.