This somewhat rusty, old, copper box is a significant piece of UCSF history. It’s the cornerstone of the first medical school building on the UCSF Parnassus campus.

The “Old Medical School Building,” see photographs here and here, was completed in 1898 and torn down in the spring of 1967. The building was originally erected to both provide more room for and consolidate the dispersed campus of the Affiliated Colleges onto Parnassus Avenue. (Briefly, the Affiliated Colleges were part of the University of California and refer to the Schools of Pharmacy, Medicine, and Dentistry– later known as UCSF.) This new site, overlooking Golden Gate Park where the Parnassus campus of UCSF still is today, was donated by the mayor of San Francisco, Alfred Sutro, in 1895.

The cornerstone of the medical school, laid on March 27, 1897, was comprised of a copper box which functioned as a time capsule.  The box was unearthed and cut open in March of 1967 when the building was torn down. Inside the box were well preserved San Francisco newspapers, a copy of the site deed donated by Adolph Sutro, photos of the Affiliated College Buildings, and University announcements of the establishment of the schools of medicine, pharmacy, dentistry, and law. 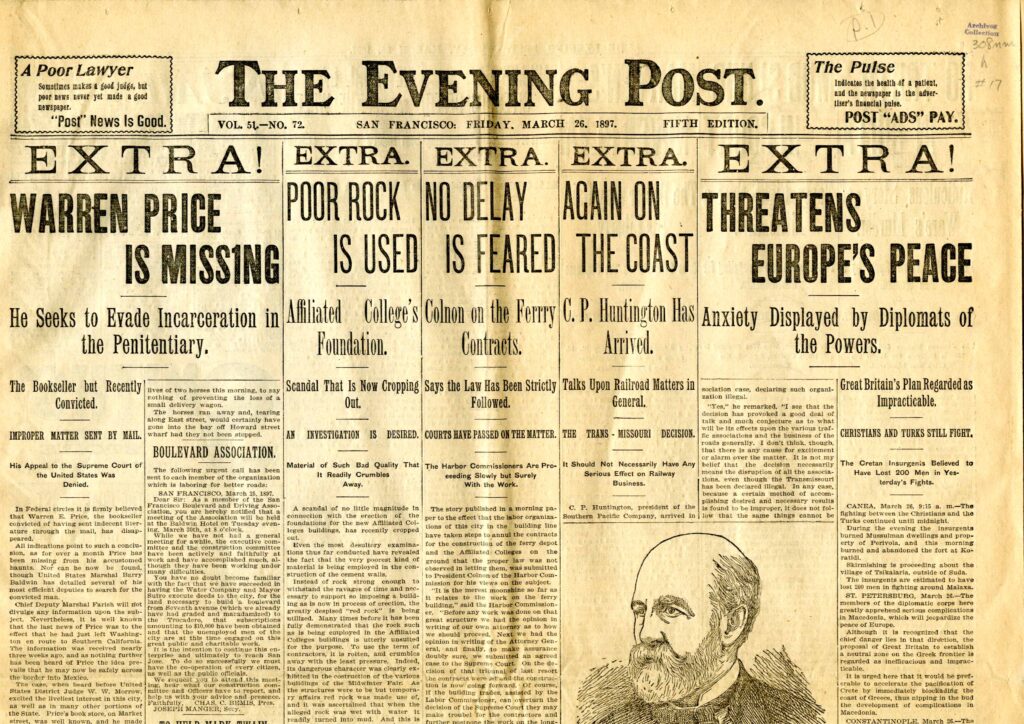 Above are the headlines from the San Francisco edition of the Evening Post, dated March 26, 1897– one of several newspapers included in the box. Upon close inspection, you may notice that one of the headlines is particularly interesting, seemingly included nonironically, it reads “Poor Rock is Used – Affiliated College’s Foundation. Scandal That Is Now Cropping Out. An Investigation Is Desired. Material of Such Bad Quality That It Readily Crumbles Away.” The unsubstantiated crumbling rock scandal must have been resolved quickly as the building not only functioned for 70 years but also survived the 1906 earthquake.

The old medical school building was torn down to make room for the newer, up-to-date buildings. Between the 1950s and 1980s much of what we know of today as the Parnassus campus was built and came into shape.

As evidenced by the newspaper, the cornerstone’s contents remain in very good condition. Pictured below are two pages from the Medical Department’s Thirty-fourth Annual Announcement, 1896-1897. The pages detail the basic outline of the program. The curriculum is summarized with the following three components: increase of the time of study to four years, yearly examinations, and graded studies. Furthermore, the subjects to be covered in each year of study are delineated. 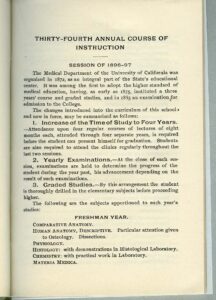 Medical Department of the University of California, Thirty-fourth Annual Announcement, 1896-1897

Medical Department of the University of California, Thirty-fourth Annual Announcement, 1896-

The cornerstone provides a fantastic and interesting snapshot of both life in San Francisco at the turn of the century and, even more so, the evolving status of UCSF and it’s curriculum.