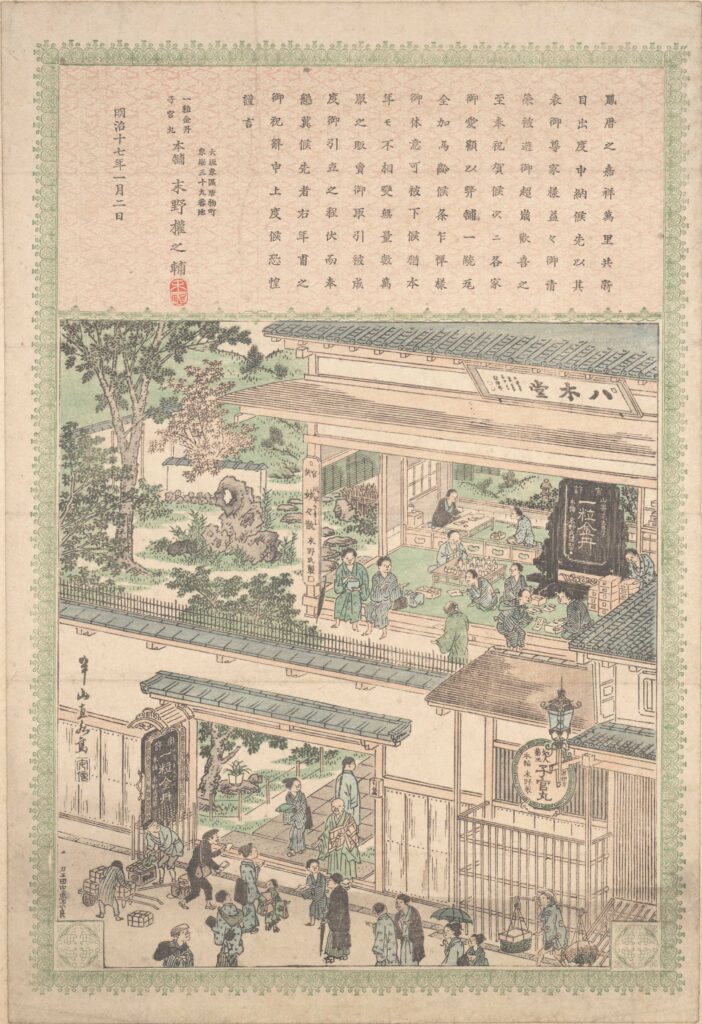 In the scene on the handscroll, the artist portrayed the famine of the Tenpō era, with starving victims receiving medicine in a Kyoto drugstore.

The two hanging scrolls were most likely painted by Yoshimasu Nangai. One is a portrait of his father, renowned physician Yoshimasu Tōdō. The other refers to Tōdō’s theory that all illnesses are caused by a single “poison.”

About the Collection
The prints displayed in this gallery are selections from the UCSF Japanese Woodblock Print Collection, a component of the Library’s East Asian Collection. In 1963 UCSF Provost and University Librarian, later Chancellor, John B. de C. Saunders, M.D., started the East Asian Collection which was then developed over the next thirty years by Librarian/Curator Atsumi Minami.

The prints and scrolls were purchased from various smaller collections in Japan. Throughout the collection of more than 400 prints are some outstanding examples of ukiyo-e, a Japanese art form that flourished from the late 17th to mid-19th centuries.

The majority of the prints focus on health-related themes: the introduction of diseases such as measles and smallpox, drug advertisements, women’s health, pediatrics, and the influence of European traders on Japanese health and medicine.  The intersection of health and religion is a theme that permeates the collection.  Many of the prints depict Shinto or Buddhist deities intervening to prevent disease, or use Confucian or Buddhist imagery to communicate a message about health or nutrition.

The UCSF Japanese Woodblock Print Collection may be viewed online at http://asian.library.ucsf.edu/. Visitors to the website may search for prints by keyword or artist, view prints by theme, and read essays about prominent themes in the collection (including drug advertisements).

Cards, t-shirts, and coffee mugs featuring images of selected prints are available for purchase at http://www.zazzle.com/ucsflibrary.